There is absolutely no denying it: Ben Wheatley is one of the most exciting British directors working at the moment. Refusing to stick to one style of movie, he has moved from thriller to comedy to horror to whatever High Rise was, all with the same grace and style as the previous film. Now he has gone for an action film with his latest, Free Fire, a movie that can be described as an hour of people shooting at each other. Sounds dull? Far from it.

It’s 1978 and in a deserted factory in Boston, two groups are meeting up for an illegal gun sale. Two men from Ireland are introduced to Vernon, a South African gunrunner. Everything is running smoothly until one of the men hired to help move the weapons is recognised by one of Vernon’s team as the same man who caused an act of violence the night before. This triggers an argument that explodes into a shoot-out, where the lines of who is shooting who becomes blurred.

It could have been so easy for Wheatley and his co-writer, Amy Jump, to deliver just another Reservoir Dogs clone, which many have compared this film with. Yet this is a far more knowing piece of work. Designed within an inch of its life, the film is a succession of consequences. Within the first part of the story, where we meet the main protagonists, we are given enough information to know who is going to shoot at who and who is going to be the protector. This isn’t about gang versus gang but more about the survival of the fittest. 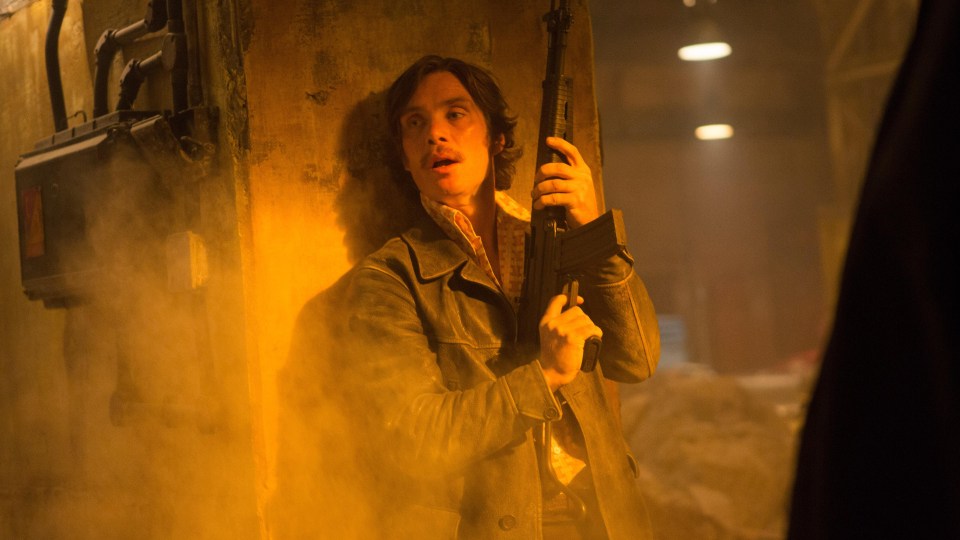 Once the bullets start firing (and trust me, there are a lot of bullets. The soundscape of gunfire is deafening!) the film isn’t as successful as the first 30 minutes, yet it still manages to keep you gripped throughout, thanks to some frankly hilarious and very quotable lines. Yes, this has more laughs than most comedies, while still keeping its genre hat well and truly on its head. At the same time, the bullets are causing pain and agony. Unlike other action films, these bullets, which often than not miss the targets, wound the protagonists and they cry out in pain. They don’t brush themselves off. In fact, this is one of the grubbiest films I have ever seen as they roll around in dust and dirt, mixed with the blood and the sweat, everyone ends up looking like they need more than one shower to clean themselves up.

While the shoot-out does have moments where it lingers on the repetitive, Wheatley ups the pacing, adds new dimensions and perils and throws in the odd surprise or two. Considering the limited locations, he does move characters out of the confines of the small shooting gallery that they seem forever trapped into other parts of the building in order to add layers to the action.

What really helps the film along is a cracking cast of actors, all throwing themselves into their respective roles with gusto and vigour. Sharlto Copley, he of District 9 fame, gets most of the laughs as the money obsessed Vernon, who uses his name as a pun more than once. Copley delivers an edgy character who could flip at any moment and yet wouldn’t have a clue what to do if he did. Armie Hammer is on good form too as the smooth Ord, a man you are never really sure about his allegiance but has a love for beard oil! Brie Larson, the only female in the cast, holds her own brilliantly among the macho men and even she gets caught up in the crossfire, which leads her to bring out her own cannon and never afraid to use it.

Free Fire will probably annoy those looking for strong storylines and deep characters. Those who want a full-on, no holds bar shoot-out with plenty of quips and one-liners will have a blast. Plus, you will never be able to listen to John Denver’s Annie’s Song in the same light ever again. Not Ben Wheatley’s best but a joyride nevertheless.