Trailers for some movies can give away huge plot pointers, while others make you think you are going to watch one film and then give you something completely different. The trailer for Wind River makes you believe that this is a murder mystery but, in fact, this is a whole lot more. For writer and director Taylor Sheridan, he only seems partly interested in the crime and more about the environment and the people, creating a slow moving yet fascinating character study. 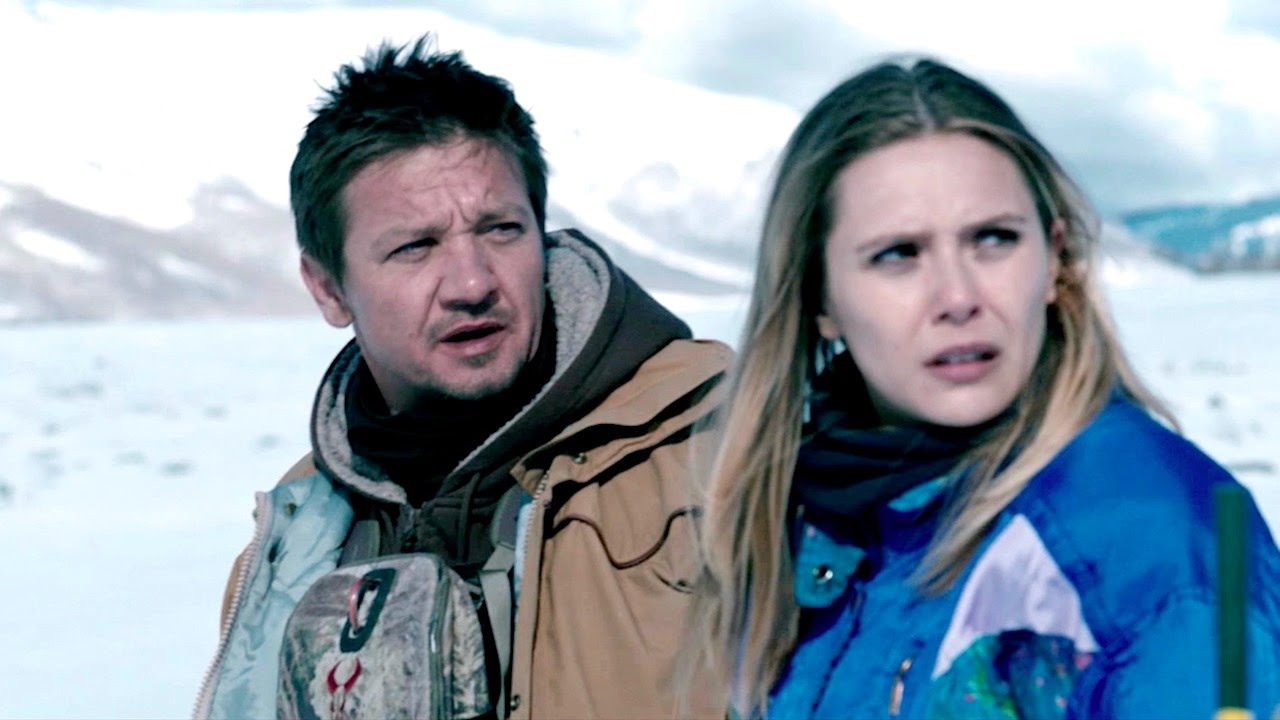 Wind River, a desolate wilderness of ice and snow in a Native American settlement. A young female local is discovered dead miles for civilization by tracker Cory Lambert. Due to jurisdiction laws, the crime can only be investigated by the FBI. Enter Jane Banner, a fresh-faced recruit who hasn’t had to deal with a crime in a place like this. She discovers that the girl has been raped and it’s a clear case of murder, yet the coroner’s report will not state that, so she has to enlist the help of Lambert to find whodunit.

This is Sheridan’s third film in a trilogy of thrillers, he also wrote the excellent Sicario and Hell or High Water, this time taking on the directing duties and he does an impressive job, capturing the vast expanse of snowy scenery which has this uncanny effect of making the viewer feel cold. At the same time, he has carved out fully formed characters who you follow through this story and you see them grow and develop as it heads towards a violent finale.

The focal points of the tale are Cody Lambert, a hunter and expert tracker who knows the layout of the land and who can see things that others can’t, yet he holds a sorrow and deep remorse inside him, yet never shows his emotions. He has gone through a similar crime before involving his own daughter, who had died after disappearing and so the crime has resonance to him. FBI agent Jane Banner, on the other hand, hasn’t had to face something like this before and needs all the help she can get. A fish out of water, she is stuck in a land where she cannot call for backup. As she is reminded, this isn’t a land of backups, this is a land of your on your own. As we witness these two people slowly piecing the crime together, you are watching two people facing their own demons and growing, particularly Jane, who is having to become a model FBI agent quicker than she realises.

All this time, Sheridan uses the pacing to build tension and to allow room for the characters to grow. He doesn’t rush things, giving scenes that most directors who cut quickly to properly develop, so dialogue, which isn’t always exposition, can be spoken that explain more about the culture, the environment and their own personal feelings. He is also more interested in the setting, his third and most important character. It’s more about the Native American and how they seem to have to set up their own rules and laws, as there seems to be no jurisdiction for them, a shocking reminder at the very end of the film proves this.

The performances are terrific, especially the two leads who are allowed to breathe more and remove themselves from their more recent efforts in The Avengers movies. Jeremy Renner stars as Cody and he is perfectly suited to this quietly spoken man who seems to be more in control than he gives away. It’s one of his finest performances as he battles with the demons that are deep inside while trying to show restraint on the outside. Elizabeth Olsen, who is one the most underrated actresses around, is terrific as Jane, a young woman who has take on a responsibility no one of her age or inexperience should, yet must step up to the plate and deliver answers.

Very reminiscent in style and pace to Winter’s Bone, this is a terrific film that is both haunting and gripping. Taylor Sheridan, after two great scripts, has done it again and taken us on a journey that most other writers or directors would have concentrated on the crime and not the people. It’s an intelligent, thought-provoking adult drama that will leave you shivering. Compelling.