Written by: Simon Farnaby, Paul King and (based on Paddington Bear) Michael Bond.

Sequels this year haven’t been great. That need to provide bigger, longer, louder does affect the overall quality of the finished product, so instead of watching an equal or even better than the original has failed on virtually every count (Thor: Ragnarok doesn’t count as that was the third film). So going into Paddington 2 I was a little anxious. The first film had been such a surprise and a joyous experience, my fear was that the team behind the success would feel the need of spending more money and doing what other sequels have done before. I needn’t have worried. Paddington 2 is just as joyful, if not, more so, without being bigger, longer or louder. 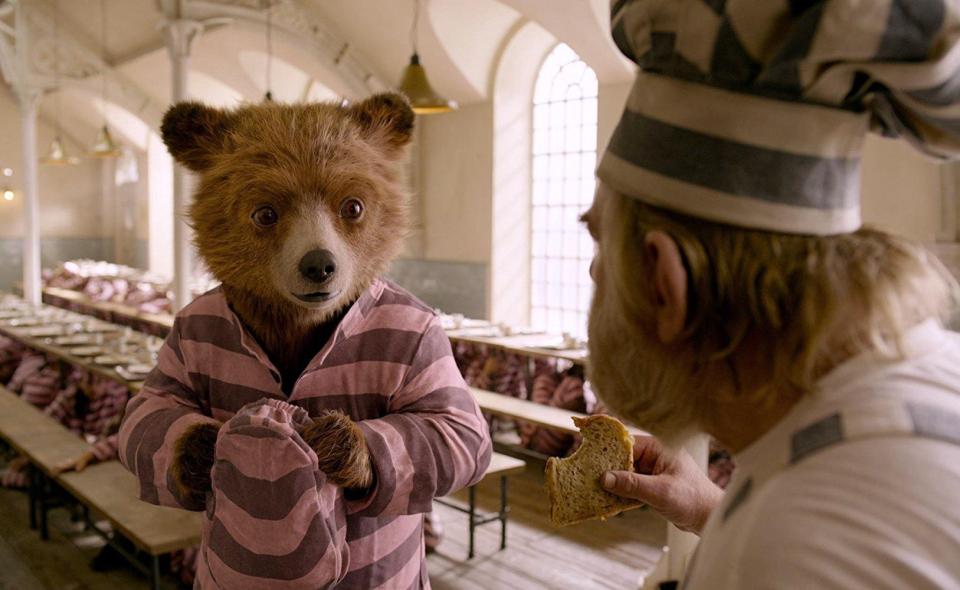 Paddington is desperate to find the perfect birthday present for his Aunt Lucy in deepest, darkest Peru. He finds an antique pop-up book of London which he feels she would love. However, someone else has their eye on the same book, for inside are a series of hidden clues that would lead to a forgotten stash of jewels belonging to a fairground owner. When the book is stolen, Paddington becomes the prime suspect and is sent to prison. The Brown family try to prove his innocence, while the bear becomes friends with Nuckles McGinty, a tough chef who is charmed over by a marmalade sandwich, and want to help the furry creature too.

After a post-credit sequence in Peru where we see how Paddington was found, we are back in London, back with all the colour and splendour that makes the city look magical and special and back with Paddington and the Browns, making everything seem right in the world again. Director Paul King uses the locations as part of the story, never as just backdrop to the events, so we get Portabello Road and the lavish antiques shop, we get the canals that run through the city, and if you took away the main focus, you’d still get a delightful travelogue round a place that never looks this stunning.

Moving to the foreground, this has charm indented throughout. The story, while not original, moves along at a thrilling pace, never forgetting that its roots are in a family fare. There is nothing in this film that will offend, or upset or scare the little ones but plenty to please and delight, even the young at heart. When it needs to be exciting, it does that, when it needs to be serious, it does that too and when it needs to be laugh-out-loud funny, it hits the marks every time. This is a film that understands how slapstick comedy works and so the jokes are set up in such detail, it’s like watching a classic Buster Keaton or Charlie Chaplin. In fact, there is a nod to Modern Times.

Then you have a cast that is as delightful and brimming with energy that is almost infectious. Hugh Bonneville returns as a less stuffy yet still delightful dim Mr Brown, while Sally Hawkins excitably mousey Mrs Brown is a pleasure to behold. Brendon Gleeson is hilarious as the brutish Nickles, with his no-nonsense attitude who is won over by the loveable bear. Yet the film’s winning trump is Hugh Grant. Playing fallen actor, Pheonix Buchanan, Grant is magnificently over-the-top as a man who was once a household name but now does dog food commercials and opens steam fairs. He is given the chance to play with voices, dress up and generally seems to be having the time of his life. Plus, he has the funniest post-credit sequence of the year. Do not leave the cinema during the credits, you will miss a gem.

At the heart of all this is Paddington himself. It’s very hard now to hear anyone else doing the voice apart from Ben Whishaw. Colin Firth was the original choice but realised he wasn’t right and left the project very late in the day, so Whishaw was brought in and the rest is history. He makes the bear both innocent and yet wise in his years. He makes him sweet but never sickly. It’s almost childlike yet still mature. It just fits so perfectly. As for the animation, you genuinely forget that this is a cartoon until after the film. He is so human in every way. The detail in every part of his face is incredible and the eyes have such human qualities. I am often talking about how good the animation is from the likes of Disney and Pixar and how they get every nuance of the human quality. They are miles behind what the team do here. It is beyond belief.

Paddington 2 is everything you hope a sequel would be. It’s consistently funny, brimming with whimsy and wit, nail-biting when it wants to be and full of heart, warmth and charm that by the end, you will shed a tear. Creator Michael Bond died during the making, and as his creation has attached to his coat, the label “Please look after this bear” the team here certainly are doing that. This is a big warm bear-hug of a movie and in these dark and depressing times, Paddington has enough magic to make the world seem right for a few hours. Utterly, utterly delightful in every way.