Written by: David Scarpa and (based on the book) John Pearson

All the Money in the World, Ridley Scott’s latest drama, won’t be remembered for being an outstanding piece of filmmaking or, for that matter, the excellent performances from its cast. What the film will be remembered for is the removal of one of its original stars, only to be replaced and have all the scenes reshot and re-edited in 10 days, a feat that has never been achieved before. While truly remarkable, it does hamper the film in a way, although this isn’t without flaws with or without its former star.

In 1973, John Paul Getty was regarded as the richest man in the world, nay, ever. His grandson, Paul, is kidnapped and the Italian mobsters demand a ransom of $17 million, which should have been loose change to the millionaire. Paul’s mother, Gail Harris, divorced from Paul’s father due to his drug habits, is broke and has to rely on the boy’s grandfather to pay up. Yet Getty refuses, which triggers off a manhunt for the missing boy, a mother refusing to give up, kidnappers who take a different tact and all the while, Getty, uses his wealth to play mind games with his security officer, Fletcher Chase, and his former daughter-in-law.

As with all of Scott’s movies, it looks magnificent. He manages to capture the environment the characters move in well and with effective use of colour and tone to set the mood and the time period. The film is definitely a game of two halves. The first hour it doesn’t quite know what it wants to be or how it wants to tell its story, so it plays around with time periods, jumping from one year to another in a very random manner, often with confused results. It’s only in the second hour that the film finds its feet, lifts the pace and becomes exciting.

Having said that, the performances from the leads are all very good. Michelle Williams, who was wasted in The Greatest Showman, is allowed much more room to create a strong-willed woman, determined to find a way of getting her child back. With an accent that is both interesting and unique, it’s hard not to sympathise with her plight as she cannot understand why her former father-in-law refuses to help. Mark Wahlberg, who has made some pretty disastrous decisions of late, shows that he is a very talented actor in the role of Getty’s security ace, Fletcher Chase. This is a man loyal to his employer yet can see the pain and agony the boy’s mother is suffering and is almost powerless to do anything.

Yet it is Christopher Plummer as the mean and nasty Getty who really steals the limelight for more than just his performance. The film was completed in September with Kevin Spacey in the role of Getty. A release date was set in time for the awards and everything looked rosy, except for the allegations that appeared against Spacey. Suddenly Scott had on his hands a dead duck. Because Spacey was on board, the film became unreleasable. Instead of abandoning the project that hundreds of people had worked on, Scott decided to reshoot all the scenes with Getty, using a different actor but only had a short period of time to do so if it was to hit its proposed release date. He hired Christopher Plummer (who was Scott’s original choice before the studio interfered), gave him four days to prep and 10 days to shoot. 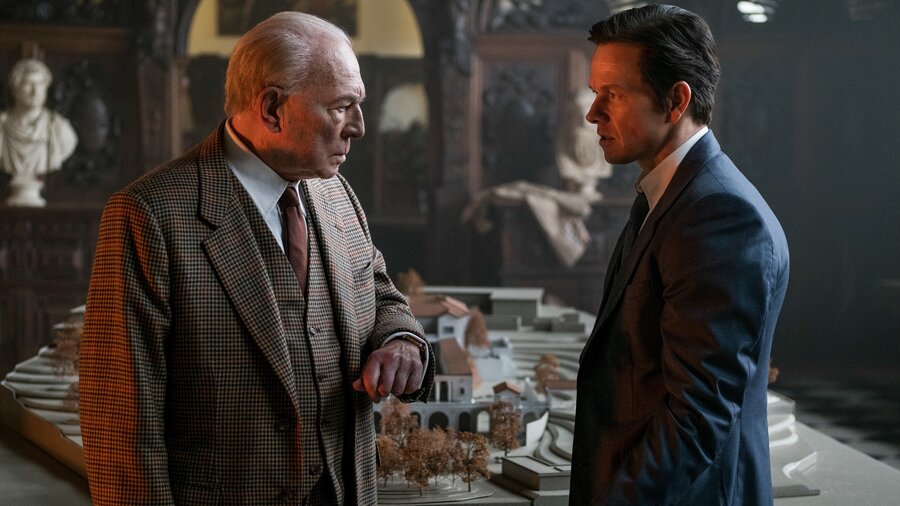 If you go looking for the joins, you won’t find any. Plummer was united with all the actors and so there was no computer wizardry or use of stand-ins. These were the actors back working the same scenes with a completely new cast member. Plummer is terrific as the mean-hearted, Scrooge-like Getty, who had a payphone in his house for visitors to use and who never spent a penny of his money but invested it in fine art. Plummer has managed to create a vile human being with a heart full of greed and yet you never really feel pure hatred for him, as Plummer is far too nice a person.

The whole event does upset the apple cart a little as you wonder just what the other version was like or how Plummer managed to be flown all over the world to film a few minutes and then off somewhere else to film another scene. This isn’t a small cameo either, but he is in about 60% of the movie.

All the Money in the World isn’t one of Scott’s best and it suffers from that contrived first hour. Yet the story is fascinating, the performances good enough to make it watchable and there’s also that reshoot which will go down in the Hollywood history books. Flawed but interesting.