Hollywood is often criticised for either ignoring events current or jumping on them and overblowing them. Often true during Awards Seasons, where something that is in tune with the consciousness of the time is played out during the glamorous, star-studded events as if Hollywood does have an understanding of what is happening in the world and we’re going to show you by being the loudest supporter or non-supporter depending on the occasion. Their film industry, however, does it much more subtly. For example, during the 1970’s, a series of conspiracy thriller came out to capture the mood of the time. The 80’s was a time of mass consumerism while more recently, feel-good seems to be the thing. What is a perfect example of capturing a mood is here in Steven Spielberg latest film, The Post. A tale set in 1971 but far more relevant to events happing in America now and played out in a way that many might miss the point.

1971. The Washington Post, a smallish paper longing to join the leagues of the big players is about to be floated on the stock exchange. It’s in an unusual position of having a female publisher, Kay Graham, a quiet woman in a man’s world. Their rivals, The New York Times, start publishing leaked documents incriminating the American Presidency for the past thirty years, in which they lied about the Vietnam War, a conflict that is still being fought. Chief Editor Ben Bradlee desperately wants a piece of the action to give his paper a higher profile but when the courts put a block on The Times publishing any more extracts and the Post receiving the full document, a moral question comes to mind. Should they publish and jeopardise being shut down forever?

It is hard to watch Spielberg’s film and see comparisons with what is happening with the current administration in power in the US at the moment and their constant battle with the press. The director has stated that he rushed to make the film so maybe in his head, this is the reason. What he has produced is a strong, often gripping drama that slowly builds to the second hour that is as exciting as any thriller, while capturing an essence of the time and a place, that of a newsroom at a paper. Co-written by Josh Singer, the man who wrote Spotlight, it has that familiar feel, while many will compare it to the 1976 classic, All The President’s Men, in which the Washington Post brought down Nixon’s administration. This is more like a companion piece.

The film starts off slow, as we get introduced to the key players and the conversations are led more by the future of the paper than the events it found itself in. In a male-dominated world, it is a struggle of owner Kay Graham to be heard. Inheriting the Post from her late husband, many see her as a danger to the company, not having the strength or will to run such a large organisation while having too many ties with the people the paper should be reporting on.

Once the paper receives the leaked documents, the film ups the tension with squabbling between the lawyers, the reporters and the money men, with Kay stuck in the middle, having connections with the politicians at the centre of the reports and having to make a decision as to which way to go. Thankfully, in the hands of Meryl Streep as Kay, we have one tremendous performance, full of subtle nuances and quiet reflections. This is the kind of performance Streep can do in her sleep and yet still make it stand-out. Ably supported by Tom Hanks as Bradlee, a bull of a man who leads with his chin, it’s an unusual role for Hanks and yet he rises to the challenge, complimenting Streep’s quiet Kay with his no-nonsense attitude. 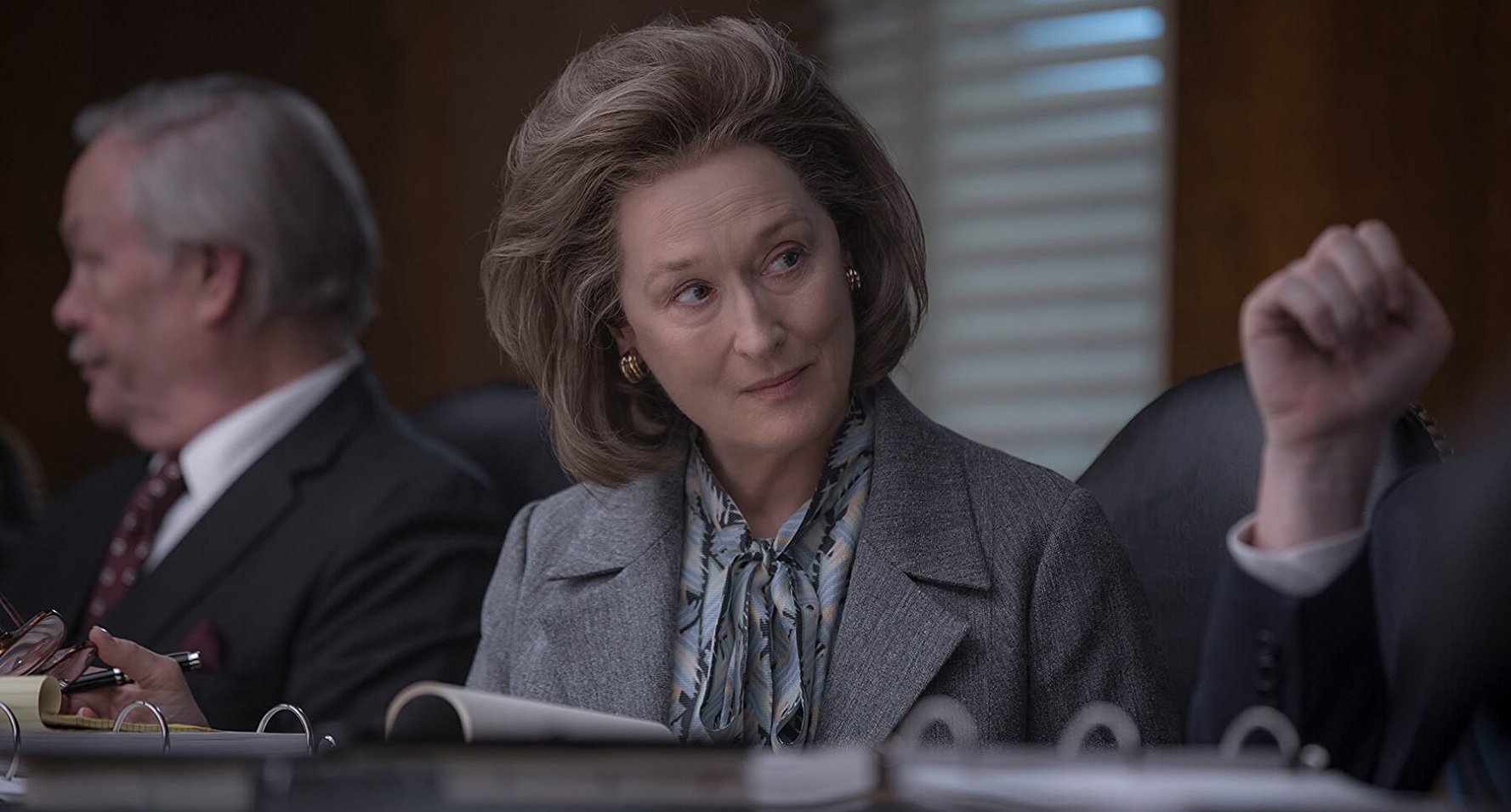 This is a finely tuned production by a master filmmaker and two of Hollywood’s finest, sending a message to all who follow the events of the White House. It’s a film that delivers a solid punch by the end, even if the first hour strolls along but once we get to the second half, it is gripping.