Aardman animations, like Pixar, have a high reputation for producing quality films that often set the benchmark for other companies to follow. Ever since their early days of creating adverts like Creature Comforts, to their most successful creations, Wallace and Gromit, Aardman and in particular, Nick Park, who don’t turn out film after film every year, their films become events. Will their latest creation, Early Man, be a disappointment. Of course not!

A giant meteor wipes out the dinosaurs but the early cavemen, discovering a glowing ball-shaped object in the creator, cannot handle it and so football is created. Years later, the creator has become home to a peaceful loving tribe of stone age cavemen who enjoy nothing more than hunting, unsuccessfully, for rabbits. Then one day, they quiet existence is rocked by the arrival of Lord Nooth, claiming the land for himself and the arrival of the Bronze Age. Doug, one of the cavemen, heads to Nooth’s home where he challenges the leader to a game of football. Winner keeps the land. Only Doug’s tribe have no idea about football.

As with POW chickens planning to escape the coop, only Nick Park to mix prehistoric times with football. The painstaking stop-motion animation is, as you would expect from Park and his team, extraordinary. These are films that are not thrown together but have time and passion behind them and whatever you think about the contents of the film, you have to acknowledge the artistry and patience it must take to put them together.

The film itself is as daft as a brush. From the moment it starts with a Ray Harryhausen style homage (the fighting dinosaurs are called Ray and Harry) and being told, in a Python-esque manner, that it just after lunch in Manchester, you know this is not going to take itself seriously. The gags come from all angles and in all styles. This is one of the reasons I love Aardman. They never stick to one type of comedy and are never afraid to just jokes that have been told before (this time even a classic Tommy Cooper gag is revisited). So we get verbal gags aplenty from the character names (Asbo, Goona) to some downright one-liners (Sliced bread! Wow! This is the best thing since…well, ever.), while the visual gags are your basic slapstick of walking into things and tripping up, yet done with class and an understanding of a joke and they will have you giggling every time.

Thankfully this doesn’t disappoint. It has joke after joke that have an air of eccentric British humour and yet in the hands of other filmmakers, they’d probably be lost. Park and his team just deliver them without a care in the world, no matter how silly they get and you are charmed by their nonsense. The story, while slight compared to other productions, is not just about football or cavemen but about being brave enough t stand up to those who want to take everything away from the little people.

The voice work is inspired, with Eddie Redmayne as Doug and an almost unrecognisable Tom Hiddleston as the evil Lord Nooth. Both actors sound like they are having a whale of a time disguising their recognisable tones all in the cause of good comedy. The rest of the cast all give the same level of respect to their parts as the filmmakers do to their craft. 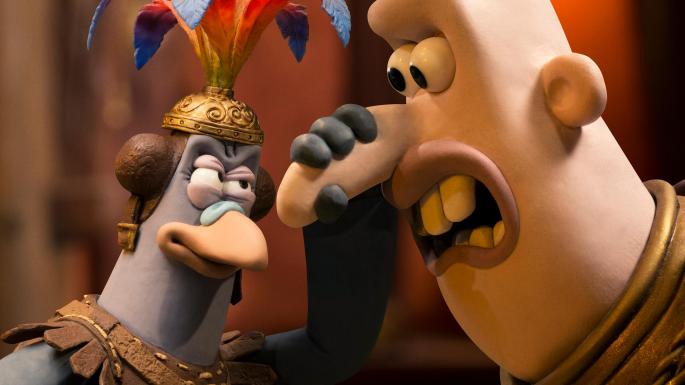 Still not as good as my personal favourite Aardman, Chicken Run, Early Man is a mad-capped joy that doesn’t allow time to think of logic or historical fact but that you sit back and have a darn good time. A real tonic for these January blues.