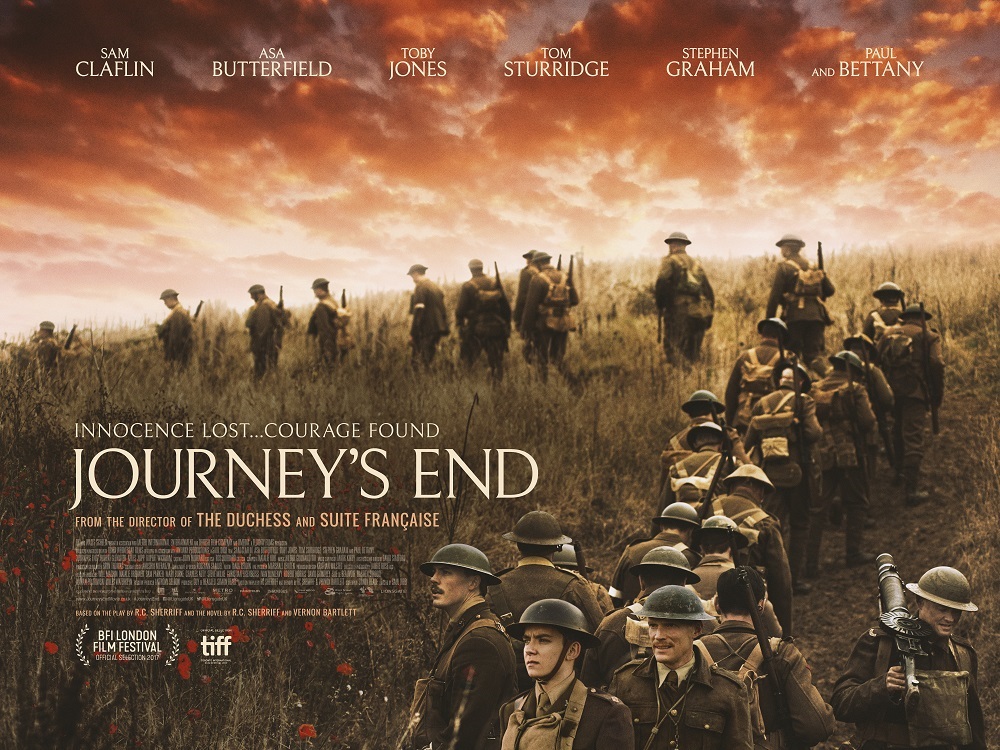 R.C. Sherriff’s acclaimed play about life in the trenches during World War I is regarded, alongside All Quiet On The Western Front, as the material in which to go to when understanding what it was like during those horrific years. The stage production, which is often revived, is a stunning piece of work that plays relevant today as it did when Sherriff wrote it back in 1928. Now we have another film version (the third) from the director of The Duchess and Suite Francaise and it is just as powerful as it was when it was first written. 1918 Aisne and a group of British soldiers, led by Captain Stanhope, are sent for their six-day tour in the trenches, with the knowledge that it is possible they will be targeted by the Germans. With their fate ahead of them, Stanhope, struggling to cope with the fear and anger he feels, turns to drink to aid him through the days, which becomes even more problematic when a young officer arrives who is the brother of his beloved.

Where the play was a triumph was that Sherriff manages to capture the emotional states of the officers in that trench, knowing what they do and yet having to show a stiff-upper-lip attitude to the whole thing. Saul Dibb’s film transfers that brilliantly, showing just how restraint the officers had to be in the face of impending doom. Dibb also captures the environment superbly, with the trenches being a muddy and vile place which is cramped and gloomy, where everyone is under each other’s feet and yet at the same time, there was an air of camaraderie. For a film depicting the horrors of war, it manages to find humour to lighten the otherwise dark mood.

You get a real sense of how these soldiers had to spend their every day, never knowing if a sniper will hit them or if a bomb will be dropped on them, while they sit in squaller and inhuman conditions. Where the real horror sits is in the orders sent down by the commanding officers’ miles from the action, to send innocent soldiers on impossible missions that will lead to their deaths. It is these moments when the story throws in its emotional punches. A sequence involving a suicide mission during daylight hours is so tense and utterly heartbreaking, you feel like screaming at the officer giving the command to do it himself.

The strength of the film is the stunning performances from the ensemble cast who fit their characters brilliantly. Sam Claflin, as Stanhope, is terrific, showing a man who, on the one hand, has to be a leader to his young platoon and yet inside he is riddled with grief, fear and disgust for those who are in charge, so his only solace is in the bottle of a whisky glass. Paul Bettany, as the kindly Osbourn, is a perfect opposite to Claflin’s Stanhope. Here is a man who speaks quietly, looks after the men with a soothing word and gentle smile and is completely calm. Even when he knows his fate, he does it without showing an inch of fear. It is a beautifully underplayed performance that works.

The rest of the cast do sterling work, with Asa Butterfield as the young officer who idolises Stanhope and yet it seems he is being kept arm’s length away from him. Stephen Graham and Toby Jones provide the light relief with some well placed comic moments, mainly about the food they are eating.

This is a first-rate drama that will hit you hard in the stomach with a strong and powerful emotional punch. On a small budget, it manages to be as stunning as a big blockbuster hit but for completely different reasons. Journey’s End deserves a larger release than what it has been given but if you get the chance to catch in, it is well worth it. Not an easy watch but worthwhile never the less.