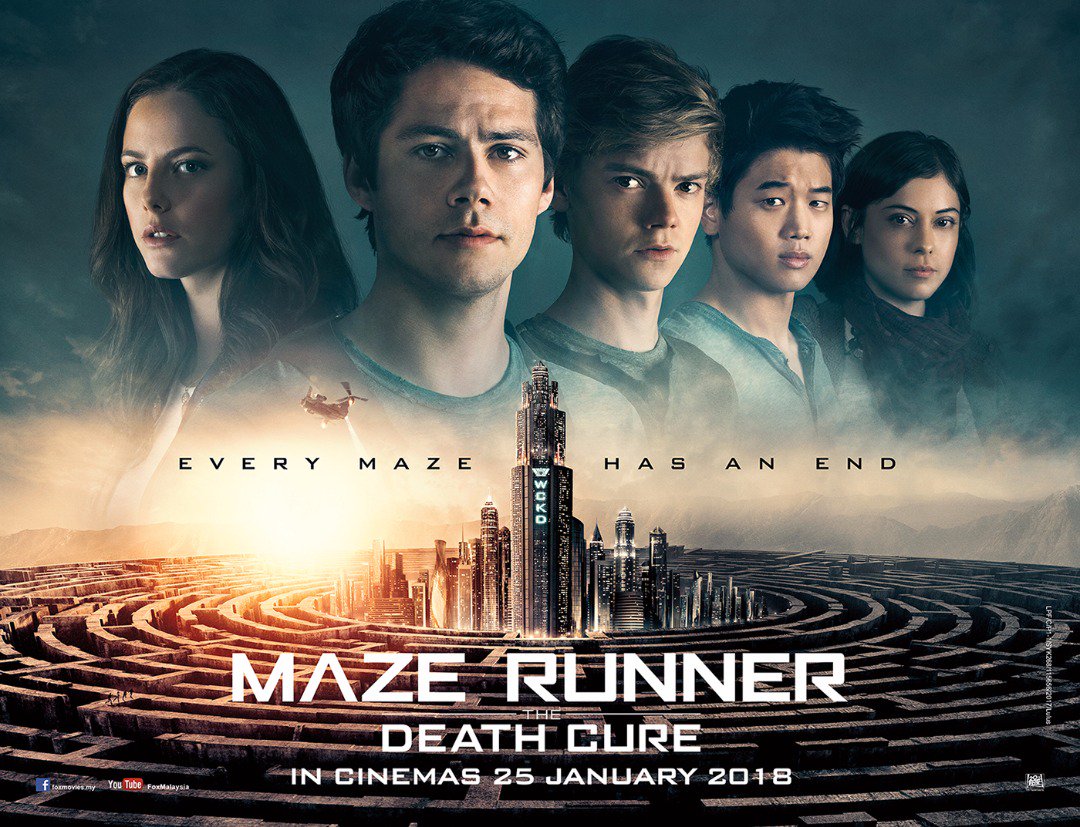 Written by: T.S. Nowlin and (based on the novel) James Dashner

When The Maze Runner hit our screens in 2014, at the height of the young adult dystopian craze, alongside Divergence and the final Hunger Games, for me it stood out. Mainly because it threw up so many questions and was full of intrigue: where were these boys? why were they there? The problem was, once they had left the Maze, as proven in the second film, it all became a little too routine. A world where a virus was turning people into zombie-like creatures and the heroes were having to escape capture from a corporation. So routine was The Scorch Trails, I couldn’t remember much about it and so before venturing into The Death Cure, the latest adventure, I had to recap.

Thomas and his gang of rebels try a valiant escape plan for their friend, Minho, who has been captured by WCKD, which fails and their buddy has gone into the centre of the corporation’s headquarters, surrounded by an almost impenetrable wall. They have to break in and save Minho. For Thomas, this is more than a mission for a friend but a chance to find out why Teresa betrayed them.

If you are going in cold to this film, without seeing the previous adventures, you will be lost from the outset. Starting with a daring train-based set piece, the Gladers, the rebel group fighting against WCKD, are trying to save their friend. Looking like a cross between Mad Max and Butch Cassidy and the Sundance Kid, it does start off things with a bang. Where the route of the problem lies in in the structure of the rest of the story. It is based on the thinnest of premises: breaking into a city and breaking out again.

To some films, this is not a problem. With a strong enough script, decent actors and a good director, a crime caper like this could last up to three hours with plenty to enjoy. Here, however, there are so many contrivances that stretching out a film for 2 hours and 20 minutes but basically covering the same ground over and over again, you find that clock watching becomes a regular habit.

It’s amazing how easy it is for the gang to get inside the walls of the city, which is the first of a series of scenes that will have you saying in your head “Really?” Of course, it’s never that easy but traps and upsets are placed solely to squeeze every inch of tension and excitement out of this final part of the franchise. Except none of it is particularly exciting or has an inch of tension.

There are a couple of surprises along the way: characters from the past suddenly appear who really shouldn’t be there. Tears are shed for the fallen heroes and Thomas has the dilemma of two girls who like him. Hard luck, man! The whole thing rolls along with an action sequence followed by some explanation followed by more action and repeat, which is where the film really trips up over itself. It becomes almost too repetitive. Sure, the set pieces are well executed but once you have seen one zombie chase or another shoot-out, you basically have seen them all.

The performances are fine from the youthful, energetic cast who have stuck with the franchise since the beginning. Aiden Gillen still wanders around with the best roll neck jumper in any movie being mean and moody while Patricia Clarkson spends her time looking like even she’s confused by what is going on. Yet, at the screening I attended, the young girls in the audience were swooning at Dylan O’Brien and Thomas Brodie-Sangster, who returns as Newt, so they seemed happy enough.

The Death Cure is not awful. It has some high points and it zips along at a tremendous pace, mainly so you can’t see the gaping plot holes. Yet this is a sign that these kinds of films have had their day and we’ve moved on from dystopia. As a bow it, it ties up any loose ends but I still hanker for the first film, which was a terrific piece of youthful entertainment that gripped. With this, the grip has loosened greatly.