Rampage is another video game adaptation that many may be too young to remember. The 80’s smash-em-up game featured a large gorilla destroying buildings and causing chaos. However, this big-screen version owes more to the Japanese monster movies of the 50’s and 60’s than the button mashing console game. With the biggest film star in the lead, this blockbuster popcorn fodder should be a winner for dumb cinema. However, it’s not as much fun as it promises.

A man-made virus has been secretly tried in space but when the station it had been tested blows up, the capsules with the virus inside land on Earth and the contents escape, being breathed in a wolf, an alligator and by George, a tamed albino gorilla who had been saved and bought up by primatologist David Okoye. George is getting bigger and aggressive, to the point that he becomes a threat. When the company who made the virus want these creatures for further experiments, they send out a signal that draws the monsters to Chicago and nothing seems to be able to stop them.

Directed by Brad Peyton, the man responsible for the so-bad-its-good San Andreas, this is being advertised as an all-out destruction-fest. The kind of nonsense that normally has Michael Bay’s name attached to it. Like San Andreas and its earthquake attachment, this is a film that has no respect for property and for people. However, it takes a long time to get to that point.

The first hour is spent building up the eventual final act, with characters being set into three camps: the good, the bad and the “we’re not sure what side he’s on!” Zoo man Davis, who just happens to be a former special ops soldier, and Dr Kate Caldwell, the woman who was involved with the creation of the virus but got fired from the company because of a personal tragedy (which is never really made clear the connection) are obviously the good guys. Claire Wyden, a woman who runs the company who made the virus (and she wears black so she must be bad) and her wimpy brother Brett are the pantomime villains, while FBI agent Harvey Russell seems to sit in the middle.

Then we have the creatures. Not only do they get bigger by the minute but they have mutated into unrecognisable creations, apart from George who stays looking like a giant white King Kong. After we’ve arrived in Chicago, it’s smashed, boom, wallop all the way, as the monsters pile into buildings and the military, trying to stop them, fire rockets, machine guns, anything that is noisy and can cause even more destruction. The effects, sometimes a little ropey, are what we have been promised and this is when the film relaxes and stops taking itself so seriously. 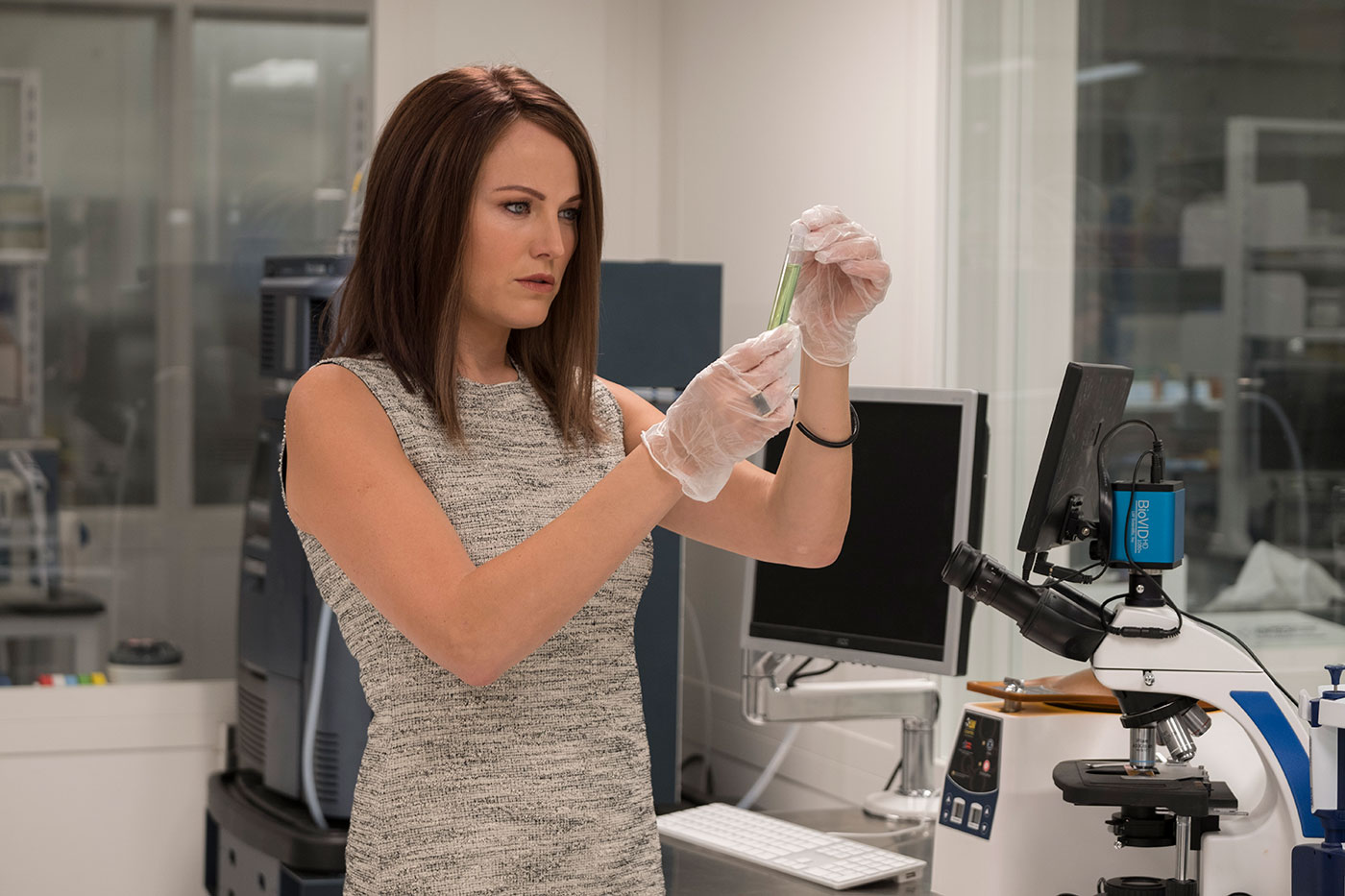 As Davies, Dwayne Johnson gives us another of his he’s a nice guy but don’t push him performances. Throwing away one-liners like empty chocolate wrappers, you cannot but warm to the muscle-bound actor, no matter how bad the film is. Brit Naomie Harris, stepping out of her Miss Moneypenny role, plays side-kick to Johnson as the fallen doctor, while Walking Dead’s Jeffrey Deam Morgan struts around like a wannabe western star as the FBI agent. It’s Malin Akerman as Claire who gives the film the response it deserves, going completely over-the-top as the villainess of the piece.

Rampage could have been a complete bonkers joyride as Peyton’s previous film turned out to be. Instead, it takes a long time to really get going and relies on random set pieces while being interrupted with some head-scratching dialogue and long scenes that could have been trimmed. Having said that, the final act is just what those looking for undemanding entertainment will enjoy.