One thing that will not find when entering Funny Cow, a new film from television director, Adrian Shergold, is not many laughs. This is a tough, uncompromising tale of a woman’s rise from abused child and woman to stand-up comedienne during the 1970’s, a time where women comics were few and far between. After watching this, you do get the feeling that it was definitely grim up North. 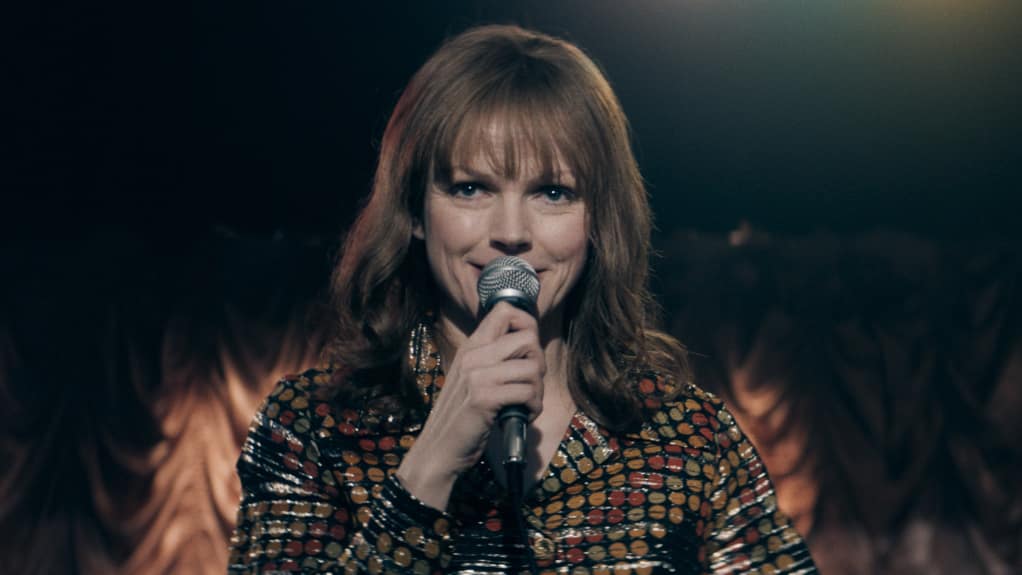 Funny Cow has spent her life being abused, whether it be by her father or by her husband, Bob. Living day to day, either being verbally or physically under attack by males, Funny Cow finds herself watching a raggedy old comic, Lenny, dying the death of a thousand deaths at a working men’s club and wanting to be part of that world. At the same time, she finds solace from violence when she meets Angus, a kind-hearted, intellectual bookshop owner. When her mentor, Lenny, is taken ill and cannot perform, she steps into his shoes and her star rises as she wanders through her existence.

Funny Cow follows the rise of success in a very grim setting. Cobbled streets where the kids think a bathtub is a swimming pool and where the young girl is beaten with a belt because she refuses to make her father a cup of tea, you immediately are given the opinion that everything you ever heard about life in a Northern town is true. Throughout the film, regardless of her age, Funny Cow (she isn’t given any other name) stands out from the dull colours and grime by wearing red in some form. We watch her go from young child to meeting and falling in love with Bob, a man who she hopes will give her a better life and yet she ends up living above and working in a laundrette.

With all this tragedy around her, from the violence of Bob to watching her mother drink herself to death, Funny Cow watches Lenny performing badly in a working man’s club and watching the heckling and ignoring his awful jokes and thinking this is the life for her. She attends a talent contest (which has other acts performed by real-life comics Vic Reeves and John Bishop) and freezes. Yet finding a man who isn’t abusive and the determination to be a comic, Funny Cow hopefully can find her escape.

Some of the scenes are quite shocking and brutal, while the comedy, heavily set in the 70’s, brimming with un-PC cracker jokes and racist impressions, give the feeling of a time and a place that time has, thankfully forgotten and yet it’s a brave film to return to those dark days, one routine shocking yet standing out due to the racist and homophobic nature, shakes us to remember that this material was regarded as prime-time TV fodder every Saturday night.

The score is a delight, from Richard Hawley, the singer/songwriter who has made a career out of gentle, quietly unobtrusive numbers, yet they set the scenes u nicely. There’s even a short cameo from the artist (along with Corinne Bailey Rae) in a duet.

The film, quite rightly, belongs to Maxine Peake as the title character. An actress who has made her name as one of the finest on TV and stage, her version of Hamlet is still regarded as a masterpiece of modern theatre, she has never had the opportunity to shine on screen. Her she relishes the chance, bringing a character who is sympathetic and yet tough, who gives as good as she gets, who you champion throughout. This is a barnstorming performance and while the film is a hard watch, it’s Peake that pulls you through it. Paddy Considine, playing against type, as Angus, is always good value and Tony Pitts, who also wrote the script, is good as the deplorable Bob.

Funny Cow is not an easy film to like. It’s a film that doesn’t pull its punches and while the comedy routines may not have to belly-laughing, there are some light moments in a very dark drama. It has the feel of a 1960’s kitchen drama (al la Saturday Night and Sunday Morning), grim, realistic and brutish. It’s worth every penny to see an actress take such a command of the screen as Maxine Peake does and this should propel her into the world of cinema.