Written by: David Kajganich, (based on characters created) Dario Argento and Daria Nicolodi

When word came out that Dario Argento’s seminal Italian horror film, Suspiria, I was a little trepidatious. This 1977 classic is a personal favourite and has so much that should not be tampered with by any other director. Then it became apparent that Italian director Luca Guadagnino didn’t want to do a remake but a cover version, taking the key characters and situations and giving the film a very different look, feel and approach to Argento’s movie. The result is exactly that, a film that gets under your skin and refuses to remove itself.

Arriving at a dance school in Berlin during political unrest, American Susie Bannion soon becomes a fascination for the staff, particularly Madame Blanc, the head of the school, who sees Susie as a lead for her opus, Volk. Yet the school has a dark secret that Dr Josef Klemperer, a grieving psychotherapist, starts to uncover as dancers seem to keep disappearing.

Argento’s film was a blast of colour and sound that was both unsettling and often shocking. Guadagnino decides to tone down the colours to muted browns and greys, although when the central six-minute dance routine arrives, red plays a major part of the costume. He has also set the action in the year the original was made, 1977, a time where a country was in the height of the Cold War, the Berlin Wall hanging over the school while terrorist acts happen on regular occasions, being used as a cover for the disappearing dancers. 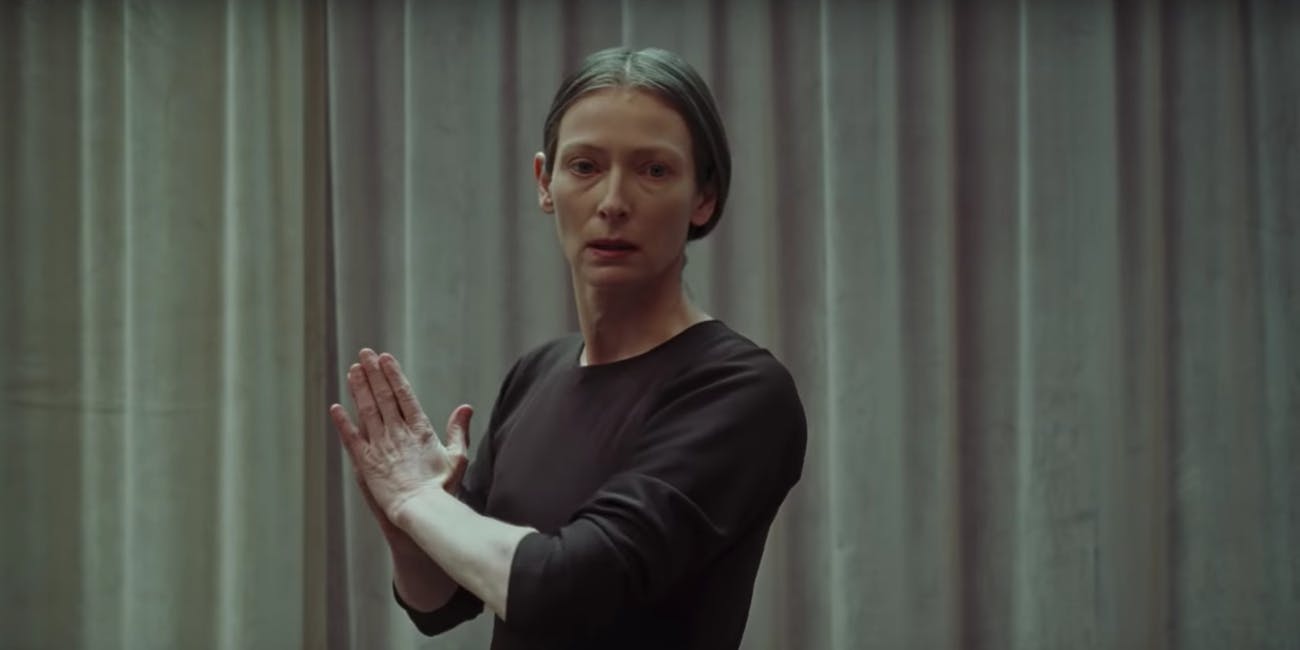 Unlike Argento, who goes for quick shocks and gore, this new version runs at 2 and a half hours, allowing Guadagnino to create rounded characters and build the tension, so when the horror does occur, you are already racked with nerves. The shockers are genuinely shocking, including a sequence in which Susie, while dancing in one room, is throwing around another dancer in another room, her body literally snapping, a scene that when previewed, had audiences feeling sick.

Guadagnino’s previous work, Call Me By My Name and A Bigger Splash, are regarded as arthouse delights, so seeing him dealing with the horror genre is a surprise. Yet he manages to do something interesting with the source material while keeping his feet firmly in the arthouse world. Some have said it suffers from being too long and often boring. I never found this to be true. It gripped, had a sense of period and built to a finale that has plenty of thrills and twists. It also helps to have Radiohead’s Thom Yorke producing the soundtrack, adding to the creepiness of the film and a million miles away from Argento’s music, which is loud and visceral, if music can be that.

The dancing is both hypnotic and violent, with Susie and the other dancers throwing themselves around with sharp, aggressive, almost savage movements that fit perfectly to the tone of the film. The Volk routine is one of the most memorable in any film involving dance. A horrific and brutal scene without actually being gory (until the end).

The performances are terrific. As Susie, Dakota Johnson is perfect, moving her further away from the films that made her famous, the dire Fifty Shades series. With her pale skin and red hair, Johnson looks like a woman hidden away from sunlight, fitting neatly with the greys and muted colours of the setting. Tilda Swinton, in three different roles (guess who else she plays), has an air of mystery and commands the screen as Madame Blanc. Nice to see Jessica Harper, the original Susie, making a cameo appearance.

Suspiria is outrageous, shocking and sometimes massively over-the-top. Yet it gets under your skin and stays there, days after seeing it. If you are a fan of the original and you fear the worst, don’t. This is a very different creature that compliments Argento’s film. It looks gorgeous, using every inch of its running time to great effect and is an intelligent horror that doesn’t pander to the jump scare school, being more about atmosphere than cheap thrills. I was fearful it would fail. I shouldn’t have worried. It’s absurd and ambitious and I loved it.