It never pleases me to see a film fall flat on its face, especially when you know how much hard work is put into making it but the fact of the matter is that Holmes and Watson, for all the good intentions it may have, is not a good film. In fact, this is a comedy that doesn’t know what it wants to be and two leads who look just as confused. The sad thing is that the cards of how poor this film was going to be was when there was no press screenings, not big premiere and no one doing the chat shows or press junkets, especially when the film was made in England (although it could have been made on a soundstage, the use of the location is limited). Coming out at Christmas, this should have been an event. It is far from that.

With his nemesis on the loose, Sherlock Holmes and his friend Dr Watson have only a few days to stop the evil mastermind from plotting to kill Queen Victoria. With his belief that Moriarty has fled the country, he is struggling to find a solution, not help by the fact that an American woman has entered his life and is putting him off his guard.

There have been several attempts to take Arthur Conan Doyle’s famous detective and turn him into a figure of humour (Gene Wilder’s The Adventures of Sherlock Holmes’s Smarter Brother and the Peter Cook/Dudley More take on The Hounds of the Baskervilles). Both failed to knock on the funny bone, mainly because, in a strange way, Holmes is quite a comic creation, with his logical and often drug-fuelled reasoning, not helped by his enormous ego. The recent TV version with Benedict Cumberbatch and Guy Ritchie’s big screen versions with Robert Downey Jr have been more successful in finding the funnier side of the detective. What writer and director Etan Cohen have done is used Ritchie’s version to ridicule, yet he never seems to go far enough. Cohen, who made the truly awful Get Hard, feels he needs to stop himself from going all out spoof, the kind of lampooning that made films like Airplane! and Young Frankenstein so successful. Cohen just doesn’t know what kind of comedy he wants to make. One moment it’s childish slapstick, the next it’s bringing the modern world into the 1800s, to using satire. While some of the jokes are clever, they all fail to hit the mark. They then become safe and predictable, most having the punchlines telegraphed way before the routines even start. Cohen needed to just choose one route. If he is going for a spoof, then go full out. If it’s slapstick, then make it a slapstick comedy. What it really lacks is any form of daftness. This is a film screaming to be as daft as a brush but it feels edited to an inch of its life in order to be funny and when that happens, it fails to even raise a smile.

Where the film struggles are giving the comedy to its two leads and leaving its very talented supporting cast with little or nothing to do. Ralph Fiennes as Moriarty, who proved quite a capable comic actor in The Grand Budapest Hotel, has one scene where he delivers lines and it fails to raise a smile. The same can be said for Steve Coogan and Hugh Laurie, both wasted in cameo roles. Even Rob Bryden, who is such a talent, is given the straight role without an opportunity to show off his impressions skills (a Tom Jones or Al Pacino would have raised the roof).

Rebecca Hall, as an American doctor having to cope with Holmes’s sexism about female doctors, does inject a little class but even she has to cope with an embarrassingly unfunny spoof of the Ghost potter’s wheel gag that is both badly delivered and incredibly dated. Only Lauren Lapkus, as Millie, a woman brought up by cats, seems to be the only other cast member allowed to be funny and you kind of want to watch her being daft a lot more than the main action.

That leaves us with Will Ferrell and John C. Reilly. This is the pair’s third film together after Talladega Nights and Step Brothers. Ferrell hasn’t really made a decent comedy in years and sadly that trend continues. The patter that made Ron Burgundy in Anchorman so funny has long gone and there are moments when it comes back but it just doesn’t work anymore. What worked with a film like Anchorman was that everyone was allowed to be funny instead of resting everything on Ferrell. Sharing the responsibility is Reilly, who is a talented actor and this will be proved in the forthcoming Stan and Ollie as Oliver Hardy. Here he is given material that even he cannot do anything with and so it feels he doesn’t even try. 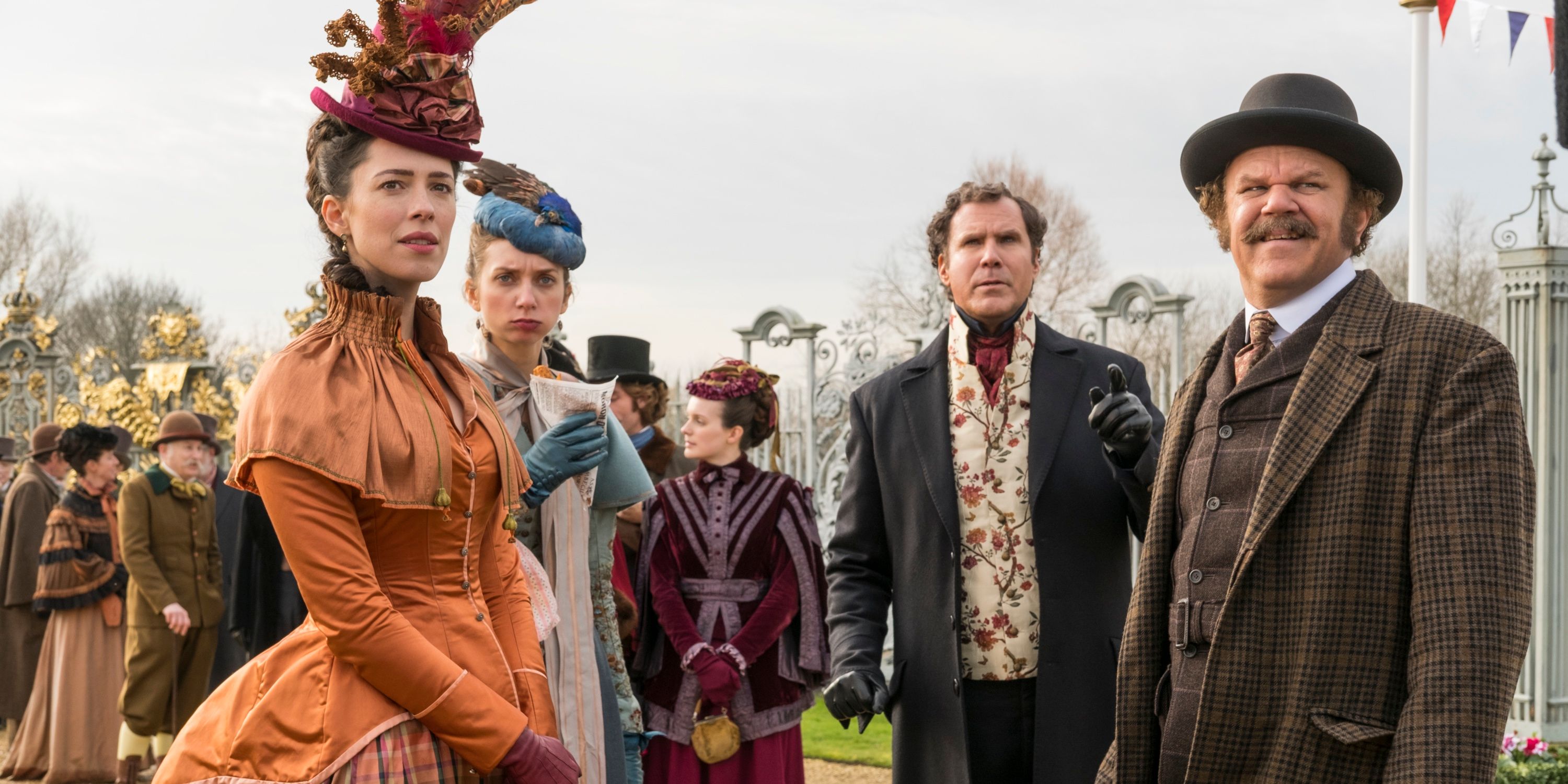 With the attention to detail by the art department and costume being so high, and having a cast more than capable of producing the goods, the blame must lay at the feet of Etan Cohen. After his previous disaster, Get Hard, he has at least learnt his lesson on using racism and homophobia for comedy. Now he just has to learn that when you make a comedy, try and make it remotely funny. A massive disappointment.