A few weeks ago, during a publicity campaign for this movie, star Liam Neeson retold a story of his time when, as a youngster, he sought revenge and used some derogatory language. As shocked as most people were, if he thought it would help the movie, it hasn’t. While you are watching this tale of a man seeking revenge, for all its attempt at black comedy, it leaves you with a bad taste. 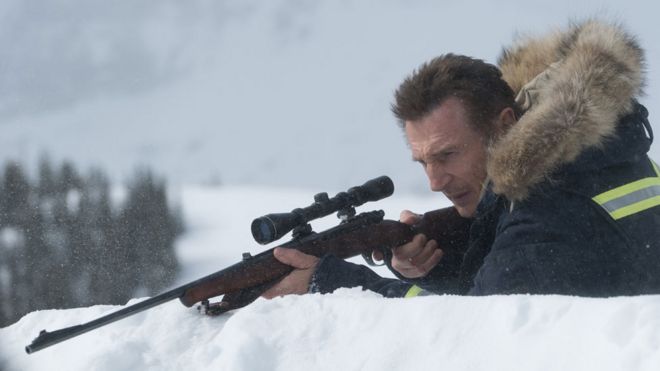 Nels Coxman, a ploughman in a snowy town in Denver, as well as being an upstanding member of the community, finds tragedy strikes his family when his son is murdered. Brimming with grief, he decides to take the law into his own hands and starts to hunt down the men responsible. Included in this is the man who ordered the crime, a drug baron called Viking. As Viking’s men mysteriously start disappearing, he believes that his rival, a Native American gang led by White Bull.

Hans Petter Moland’s film, a remake of his Norwegian 2014 thriller, In Order of Disappearance, is a curious mix of Fargo meets Pulp Fiction with Taken as a bonus. Sadly, this blend doesn’t quite come together, as the dark comedy elements with the violence seem never to gel as much as it does in those other movies. As Nels bumps off his victims, we are given a title card of the character’s name, his or her nickname and an image of their religion. Perfectly fine at the beginning but the joke does run thin until the finale shoot-out, where the screen becomes filled with names.

In the original, Stellan Skarsgard plays the perfect citizen who is forced into grief and despair, leading him to change his character of that of a vengeful killer. It works because Skarsgard isn’t known for his action movies, instead can play the everyman. The casting of Neeson takes the film into a different direction. We do forget that Neeson started life off as a serious actor, but since reinventing himself as an action hero, you find it hard to believe that he is just an ordinary worker who doesn’t know how to kill.

While the action set pieces are well handled and the use of the Denver backdrop looks glorious, the film never finds its feet, and you care very little for the characters. Laura Dern, as Nels wife, is given so little to do she just disappears halfway into the movie, never to return or to be spoken about, as if she decided she’d had enough and just walked off the picture.

There are moments which throws the picture off kilt. White Bull, the big boss of the Native American gang, is seen in a gift shop filled with Native American souvenirs but discovering that they are made in China. This touching moment feels out of place in a film where death and violence with a dash of humour seem to be the order of the day.

The cast does their best, with Tom Bateman going full out panto villain as Viking, while Domenick Lombardozzi, as Viking’s loyal bodyguard, nicely underplays his role of a heavy while keeping a secret that affects the ending. Neeson, however, is, well, Neeson. He is quietly wandering around punching people in the face. If you are a fan of Neeson when he’s in this mode, then you’ll enjoy it. Personally, it’s all becoming a little old hat. 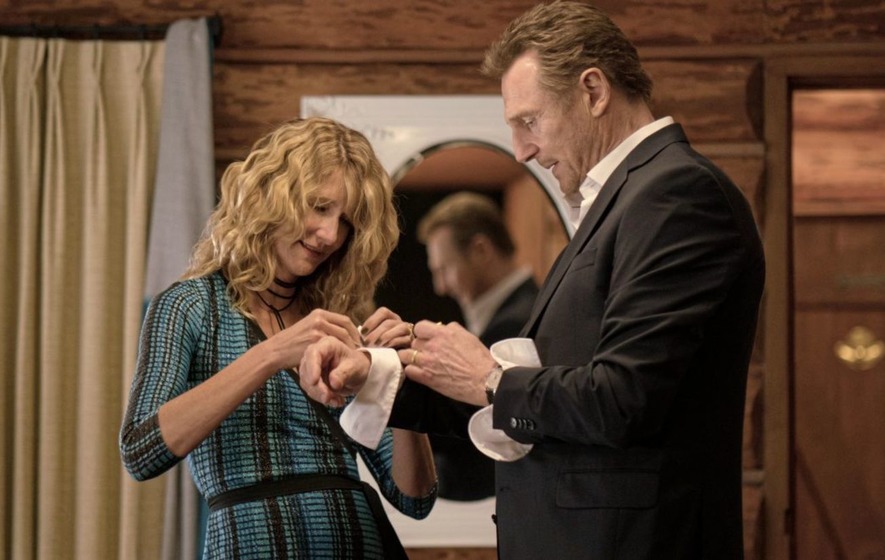 Cold Pursuit should have been another slice of popcorn fodder that is fine while on but instantly forgettable. However, with the events of recent days involving Neeson, you cannot help but have that in the back of your mind, leaving the film with a bad taste. Usually, his movies do moderately well. I get the feeling this won’t be as successful.