Late Night is a comedy-drama with its heart absolutely in the right place. Dealing with a topic that is often on the agenda in the media, it shows a movement in Hollywood that is desperately righting the wrongs after the #MeToo movement as well as diversity, ethnicity and sexism in the workplace. It also has two extremely likeable performances that, if it wasn’t for the pairing, could have been a dud. 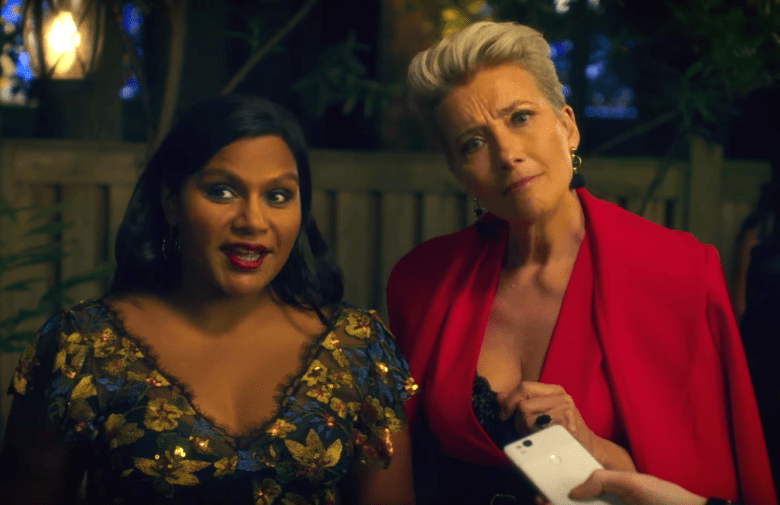 Katherine Newbury is the host of a late-night chat show that is suffering from falling audience figures. The network considers Katherine to be out of touch, not only with the show but behind the scenes, having a room of white male writers. They want to replace her with a fresh, controversial new comic. Deciding to counterbalance this problem, she hires Molly Patel, a woman with no comedy writing skills but who is willing to stand up to the sarcastic host. Will Katherine change her ways for the sake of the show?

Using the chat show as a basis for a comedy isn’t new. With shows like 30 Rock and The Larry Sanders Show has already expertly played with the format, Late Night decides to concentrate more on the problems of modern America and their lack of diversity. Katherine, a British comedian who made it big in Hollywood and has been hosting the show for 14 years, doesn’t have the first clue about what audiences want. Booking guests nobody has heard of, refusing to embrace social media, the network wants her out. She doesn’t even know the names of her writers, instead of giving them numbers. Yet in enters Molly, full of life and vibrancy, having to face her own demons and levels of sexism in the office. Frowned upon by her colleague for getting the job because she is a woman and of colour, she has to share the ladies room as this is where the men go so they don’t stink out their own toilets, she is fighting an uphill battle.

The film delivers its many subjects, including depression and societies inability to distinguish the difference if a man has an affair to when a woman does, with honesty and an element of truth. It never relies on being nasty or vile, instead gently moves along at a solid pace, occasionally raising a smile or two along the way. It isn’t always as funny as it could be and a longing for a more vicious satirical bite wouldn’t have gone amiss. Yet you cannot fault it for trying to change our views on the working world and how we perceive celebrity and the people who really make them who they are.

Emma Thompson shines as Katherine, a bitter, egomaniac who doesn’t have the time of day for those who work for her and who refuses to be told she is wrong. With elements of P.L. Travers, the character she played in Saving Mr Banks, Thompson is a master of the sarcastic putdown and she saviours every delicious one-liner. Mandy Kaling, who also wrote the script, is an absolute opposite as Molly, the young woman who helps to turn Katherine’s life around. The pair are a perfect odd couple, and they work well together.

Late Night isn’t a laugh-a-minute, and it does get a little schmaltzy by the end, but the joy is watching Thomspon and Kaling together and watching a film that isn’t afraid to deal with difficult subjects in a way that can still leave you with a smile on your face. Brave.