Written by: Tommy Lee Jones, Kieran Fitzgerald, Wesley A. Oliver and (based on the novel) Glendor Swarthout

The western genre is one that comes and goes. Just when we think it’s on its way back, it disappears again and so on. So will Tommy Lee Jones’s directed cowboy flick, The Homesman, help revive this well-worn style of film? Sadly I think not because for all its beauty and strong performances, this is a rambling film that has nowhere to go.

Living the pioneer life has driven three women to madness, so it has been decided to transport them across country to a much more secure community. After drawing lots, it is up to independent farmer, Mary Bee Cuddy to take the women on the long journey that could take weeks. Saving the life of drifter, George Briggs, she persuades him to join her on the quest and these two unlikely people have to face treacherous weather, Indians and the constant threat of losing the women.

Let’s deal with the positives first. It’s a gloriously looking film. Having the same style of a Clint Eastwood western, Jones the director has a strong eye for the cinematic. It is vast, dangerous and yet wondrous to view. He uses every frame to capture the emptiness of the prairie, dousing it in rich colours and interesting visuals.

For the first half of the film, it’s trudges along, not at a great pace but enough to keep the attention and interest of the audience, giving time for the characters to grow and develop. It also gives plenty of time for the relationship between Mary Bee and George to blossom, both being from very different worlds yet facing a common goal. There is also a tremendous feeling of how isolating  and challenging it was for those who decided to live the life of a pioneer and these moments are a strong point of the film’s first act.

The lead performances from two of Hollywood’s best are, as you would expect, superb. Jones is one of those actors who could just stand on-screen and not say a word, yet you wouldn’t be able to pull your eyes away from him. Here, as the grubby, stubborn George Briggs, he manages that rare ability of bringing alive a character that you wouldn’t necessarily like in the hands of another, less confident actor. Yet Jones has a quality about him that you instantly warm to.

The other great performance comes from Hilary Swank as Mary Bee. Not seen on-screen enough, she is stiff, cold and determined and all those qualities are the reasons no man will marry her, so a sense of loneliness hangs over her head. While never showy, it’s a terrific performance in which she manages to keep us at arm’s length and yet we can emote with her.

The supporting cast, especially from the three women on the journey, are excellent and with neat little cameos from John Lithgow, James Spader and Meryl Streep, this is a film full of quality. 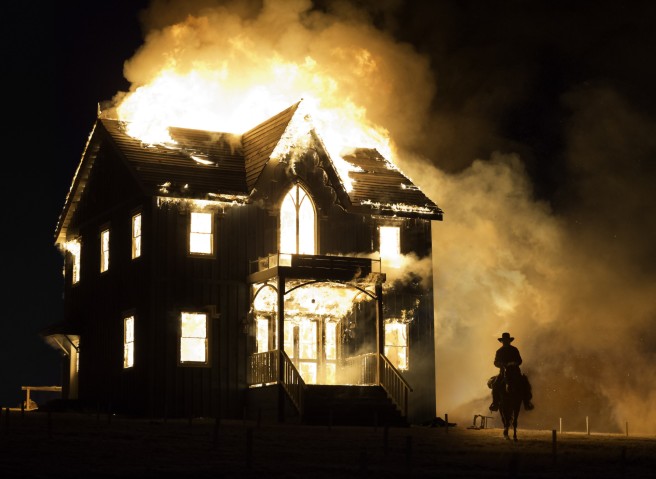 However, what brings the film down is the plot. A decent idea seems only half-cooked. Based on a novel by Glendor Swarthout and scripted by Jones and two others, it ambles along until three-quarters of the way through when an incident occurs and the film changes pace and direction completely, as if it is desperately looking for a way out. The incident itself (without any spoilers) left me cold and indifferent, as I was with the finale of Interstellar. It feels contrived and only exists to find a dramatic arc, leading to an ending that doesn’t exactly sparkle.

A pity really because up to then, The Homesman was a handsome and enjoyable old style western drama that captured the mood and times of the old pioneers really well and with the excellent cinematography and superb performances, this was on the way to being a winner. Instead it fell drastically at the final fence. Such a shame.