Who would have thought that the funniest double act this year would be formed by two of Hollywood’s straightest men, normally known for their intense, deep and meaningful performances. Yet the man who gave us Lethal Weapon and Kiss Kiss Bang Bang has managed to bring these two heavyweights together to produce an old fashioned detective buddy comedy thriller that may not make much sense but is pure entertainment,

Co-writer and director Shane Black, who was responsible for a string of hit buddy movies, has taken the elements that made him such a go-to writer, two polar opposites forced to work together and thrown in a Chinatown conspiracy thriller set in the most paranoid period, the 70’s.  Although the plot is central, as March and Healy are sent on wild goose chases to track down this missing girl and to find the film that everyone seems to want, Black main focus seems to be on the two central characters, both damaged in some way and yet never allowing them to drop their guards and show just how damaged they really are.

The plot is often non-sensical and full of contrivances and gaping holes. Yet for some reason it never seems to matter, because what Black is so good at is making the characters both believable and cartoonish in the same breath. The dialogue between March and Healy is hilarious, bouncing one-liner after one-liner off each other. Add into the mix March’s very savvy 13-year-old daughter, Holly, and you have a trio of fun. The premise for the reasoning behind the girl’s disappearance, big business causing environmental destruction, has the same ring as Roman Polanski’s Chinatown, which dealt with water pollution. It seems that Black has used that film as a template for this, with the seventies as a backdrop, full of demonstrating hippies and the richer side of the porn industry.

Characters come in and out of the story, most ending up dead. Yet the focus lies heavily on the relationship between March and Healy. March, a former cop who had tragedy strike, leading him to be a father to his very independent child, stumbling around as a detective who manages to get answers mostly by accident. Healy, on the other hand, is a more silent type who refuses to give anything away, who would rather use his fists for answers than words and who almost becomes a more concerned father to Holly than March is.

The film works, not only through Black and Anthony Bagarozzi’s smart script but from the performances. Young Angourie Rice manages to hold her own as Holly, the kid with far more intelligence than either of the detective partnership. Kim Basinger makes a brief yet welcome return as a district attorney who hires the partnership.  Yet it is that partnership which steals the show.

Russell Crowe, as Healy, is in the best role he has had in years. Predominantly playing the straight guy, he is still given enough smart one-liners to earn some pretty big laughs. It’s a joy to see Crowe in lighter vein and using his tough-guy persona to excellent effect. Teaming him with Ryan Gosling is a stroke of genius. As the haphazard March, Gosling proves himself a very capable physical comedian, with most of his laughs coming from his misfortune. A scene in which he is protecting himself from Healy while March is sitting in a public toilet is hilarious, as he tries to keep a door open with his foot, at the same time having a gun pointing at his new partner and trying to extinguish a cigarette. 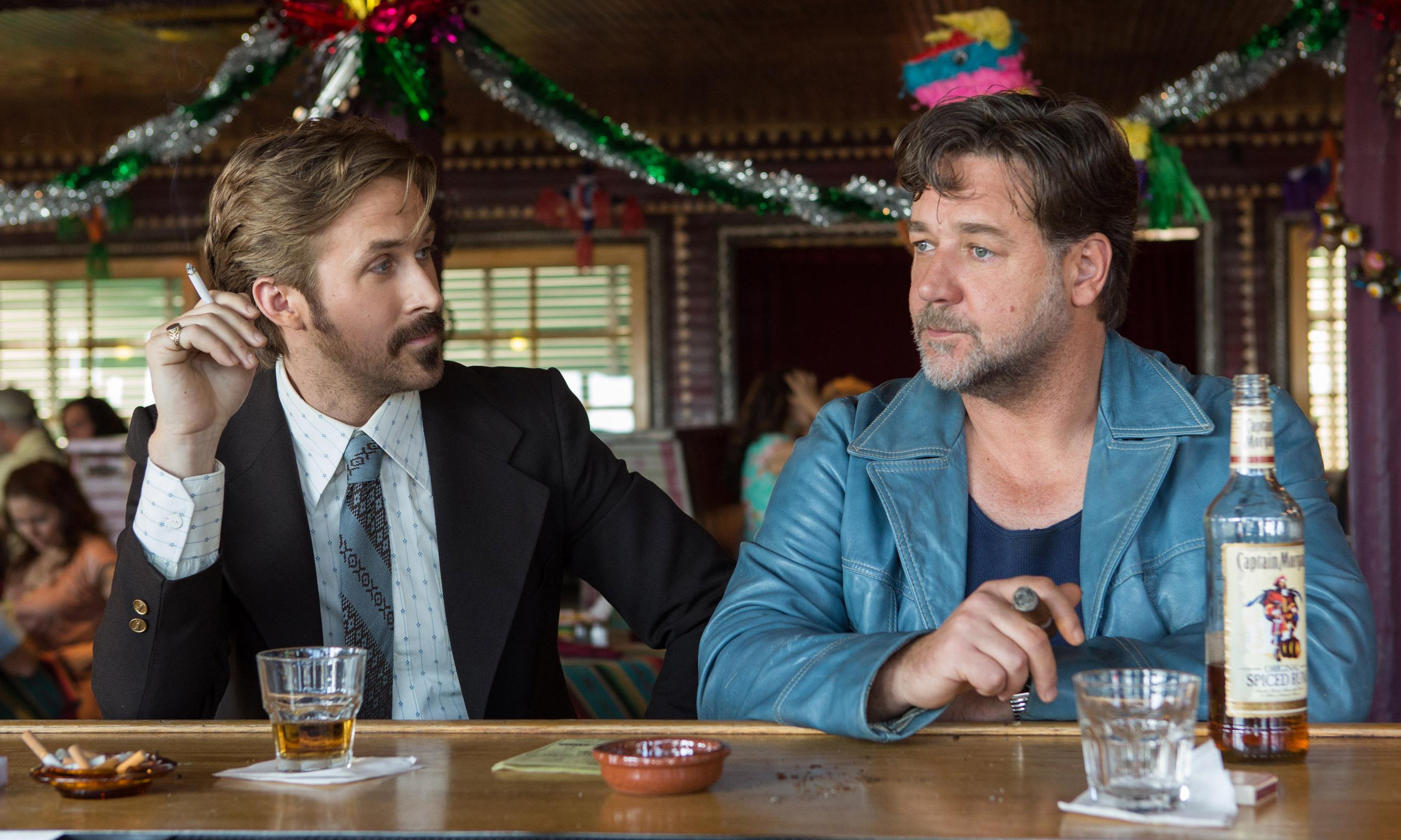 The Nice Guy may not make sense. It may not be regarded as high art. What it does guarantee is entertainment for the full two hours. These two characters aren’t the most likeable souls and yet you don’t mind being in their company. And for those looking for Shane Black’s trademark “Christmas” backdrop, that even pops up. It’s good to have Black back on form and I hope this isn’t the last we see of those Nice Guys.