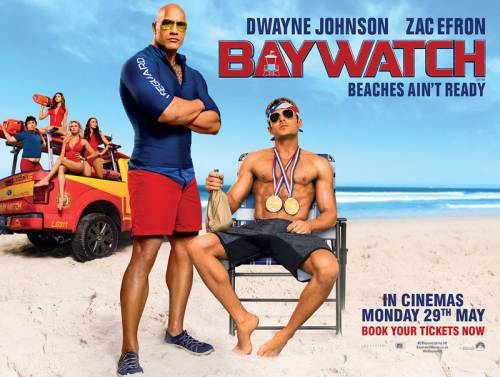 Damn you, Baywatch! You have really disappointed me! I was hoping, after witnessing a collection of downright turkeys recently, to come out and rant about another disaster. But I can’t. The reason is that this remake of the massively popular TV series of the 90’s isn’t the car crash that it certainly looked like being from the trailers. Hold on a minute, it’s no masterpiece but this messy, confused big screen adventure did have me laughing. Not huge belly laughs but hidden in the broad humour are actual jokes that work.

Mitch Buchannon is in charge of a group of lifeguards patrolling the beaches, saving lives and making sure of general safety in and out of the water. He has been given a new recruit in the form of a former Olympic swimmer and bad boy, Matt Brody. The two don’t see eye to eye; Mitch wanting his team to follow rules while Brody is wild and dangerous. When packets of drugs washed up on the shore, Mitch decides to investigate and soon it becomes apparent that someone wants to take over the beach and will do anything in their power to get it.

Let’s get the bad out of the way. The film is way too long and it is very noticeable. The main reason for this is that the filmmakers, after a series of “events” that introduce the characters, decide that audiences want more than just scenes and they need a plot thrown in. In fact, and here’s a first, Baywatch doesn’t need a plot. I was thinking about a film very similar to this, the original Police Academy. This was a film wholly built around a series of gags and only introduced the peril moment in the last 15 minutes. If Baywatch had taken that approach, this would have been a better film.

Instead, we get a tacked on tale of a property developer who wants to own the beach and its surrounding areas while smuggling drugs. It feels forced and doesn’t improve or help the movie, only to slow things down. Hence, if the film was 30 minutes shorter, it could have been sharper and funnier and the added drug plot could have been done and dusted in the final 10 minutes.

Yet in between the “plot” are some moments that are amusing. The gross-out jokes about body parts, bodily fluid, and sexual innuendo, for some reason, doesn’t seem half as nasty as in most American comedies. They often leave a bad taste in your mouth. Here, they don’t. I was trying to work out why they would work here and yet something like Dirty Grandpa was so offensive. The reason is that you actually like these characters.

There’s an unusual balance between the sexes here. The main selling point of the TV show was the slow motion running shots, where the world seems to be concentrating on Pamela Anderson’s “talents” rather than a story or character development. Yes, there are plenty of slow motion moments, most of which are ridiculed by the cast but the men are stripped off more than the women. There also seems to be a lack of misogyny here too. All are very equal.

Mostly the film works because you genuinely like spending time with the characters. They poke fun at each other, they poke fun at themselves and they seem to be having a blast, which usually doesn’t translate well for audiences. Here it does. Dwayne Johnson, taking David Hasselhoff’s role, is such a cool character yet he has a nice sense of comic timing while managing to make the action sequences believable. Zac Efron, who turns up in these broad comedies is actually funny here and the banter between the two leads are the film’s crowning glory.

Nobody is saying that Baywatch is an outstanding movie. It has plenty of faults but considering I went in with very low expectations, I have to say I am pleasantly surprised. This isn’t going to change the shape of cinema and it won’t make my top ten but after Pirates 5 and Wimpy Kid 4, this is Citizen Kane compared to them.