According to my partner, The Dark Tower novels by Stephen King are among some of his finest work. I haven’t read them but looking at the eight volumes, they seem like a weighty connection of stories. So why is it that the long-awaited screen adaptation is only 95 minutes long and everything seems rushed? Were they setting out to capture the author’s story for the mindset that spends its time on mobile phones and have short attention spans? Or was this a cynical cash-in? Either way, it fails to ignite and deliver anything exciting, interesting or of any sense.

In the centre of the universe is a Dark Tower. If the tower is destroyed, it will unleash evil throughout the worlds. That’s the plan of Walter, or as he is also known, the Man in Black. By using children who have the shine, telepaths, to cause the destruction, it soon becomes apparent the shine he needs is Jake, a New York kid whose been having dreams about the tower. Jake’s only hope of not getting captured is to find Roland, the last of the gunslingers, who has a personal vendetta against Walter.

This is a film that has been made by people who expect everyone in the world to have read the novels and so they refuse to explain anything. There are rat-like humans who have fake skins that don’t seem to have any backstory and we are expected to take them as the norm. Who is the man in black? Is he the devil or just an evil entity and why was he called Walter? Everything is thrown at you like you’re in a busy restaurant and they want you out because the next customers are waiting so here’s your starters, mains and dessert, now eat up.

In the process of rushing the whole film looks incomplete in places. Set pieces happen without any real build-up. They just happen. An attack on a village is played out in virtual darkness so you can’t see what’s happening. One character, who doesn’t really get an introduction, is set up for a big fight with the Gunslinger and within a blink of an eye, it’s over and you cannot help but think this was much longer.

King is first and foremost a horror writer and I am pretty sure that the books were far more graphic than here, as the watered down 12A classification shows. A scene involving a monster chasing our young hero, Jake, looks more like something you’d have expected from an 80’s kids adventure like Ghostbusters than from the master of macabre. It’s played out far too safe.

Even the set pieces are messy and badly handled. While it’s fun and totally cool that the Gunslinger can load a gun by just dropping bullets into the chamber, it doesn’t follow through and ends up with him never in any real peril and it becomes a series of gun fights with one using a gun while his attackers use sticks! The one moment the film does work is when the Gunslinger is brought to modern day New York and is given hot dogs and coke. This injects an element of humour but it’s far too brief and then it soon gets back to being far too serious.

The cast tries their best with the material. Idris Elba certainly looks the part of a lone gun fighter but he deserves so much better. Matthew McConaughey is quietly cool as the villain but nothing is explained about him. Is he pure evil? Or just a clever magician who pops up wherever he likes to stop people from breathing. 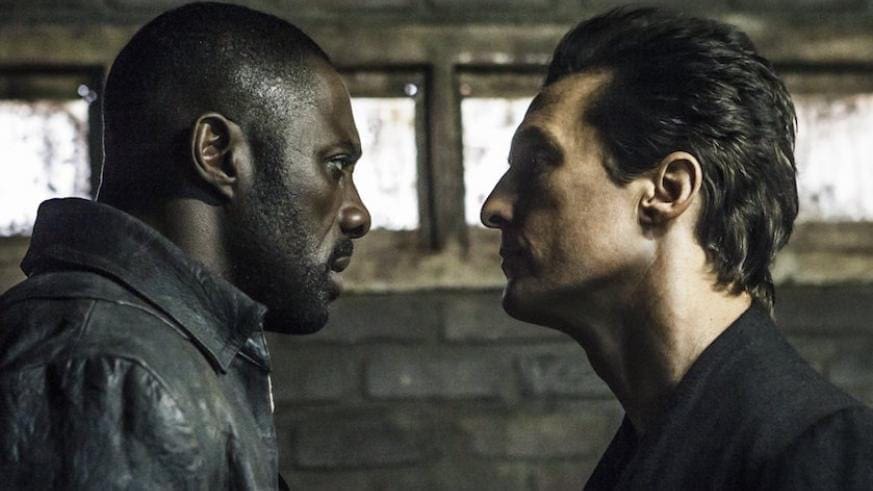 The Dark Tower is, what I like to call, a missed opportunity. Somewhere inside this mess is a decent story waiting to get back. Maybe a modern-day Lord of the Rings. Instead, we get a nonsensical, rushed film that is inconsistent in tone and pace and wastes a very talented cast. I’d be surprised if they make a sequel as I get the feeling this will flop badly. Not awful, just not very good.