If you are a regular reader of this here blog, you will know how much has not been a great fan of American comedies. The norm for these modern versions is usually nasty, homophobic, misogynistic which relies on jokes about bodily fluids or body parts. So going into Game Night, the new film from the makers of Horrible Bosses and Vacation, gave me a feeling of dread. Was this to be just another ill-natured film that thinks by saying the F-word 900 times, it will make the audience laugh. What I got was something quite different. I got a comedy that was genuinely funny. So much so, I laugh consistently throughout and left the cinema feeling thoroughly entertained.

Max and Annie, a couple who met at a quiz night, love nothing more than competitive evenings playing games with their friends while avoiding inviting their creepy cop neighbour. When Max’s brother, Brooke, a more successful version of his younger sibling, arrives, he promises a Game Night to remember, a murder mystery in which actors will arrive and kidnap one of them while the others have to find them. What the group do realise is that Brooke is taken and not by actors, putting the group into a world of trouble.

While the basic premise may not seem like the most original idea ever. It borrows the central idea from the Michael Douglas/Sean Penn thriller The Game and has the same approach as the Steve Carrell/Tina Fey comedy thriller Date Night (a film that I felt was hugely underrated) and has contrivances throughout, yet Mark Perez’s script is brimming with razor-sharp lines that are genuinely funny. 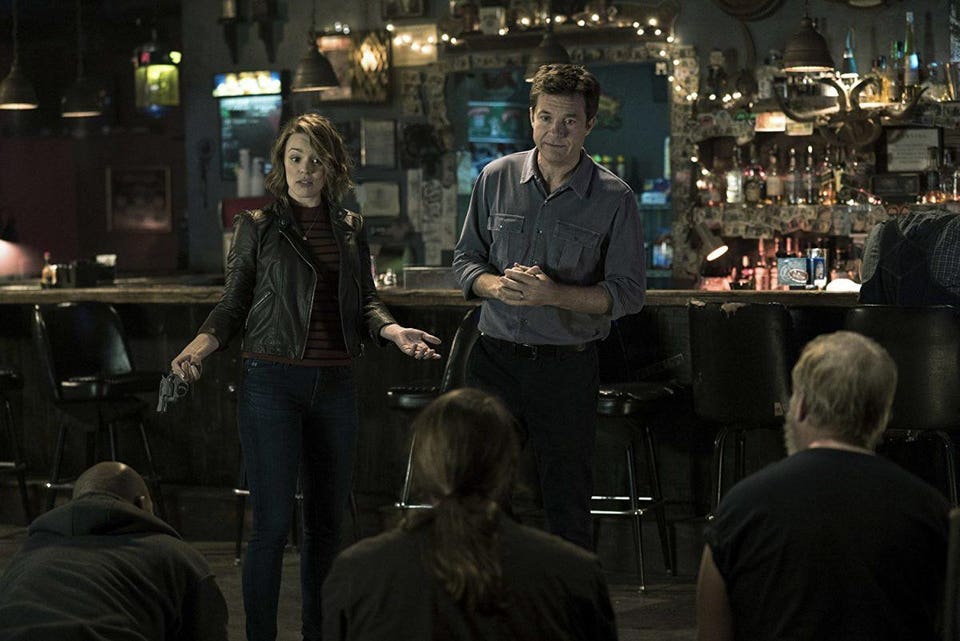 We follow this group as they go into the night trying to piece together the clues left to find Brooke, all the while coping with their own neurosis and problems. Max and Annie’s over competitiveness, Kevin and Michelle, childhood sweethearts who married young and have been together until an unexpected drinking game brings disharmony between them and Ryan, a man who normally brings blonde models to the game night but this time brings smarter than smart Irish workmate, Sarah.

This is the real strength of the film. Instead of delivering a group of one-dimensional characters, we have fully fleshed out people with back stories and with something interesting to say outside of just swearing. The pace zips along at a decent rate so we can fully appreciate the predicament these likeable characters find themselves. Then there’s Gary, the cop next door with his white dog and an estranged wife he refuses to let go of.

The performances are terrific from this very talented cast. Jason Bateman and Rachel McAdams make for a delightful couple who bounce off each other well and who also deliver killer punchlines with ease. A scene in which Bateman’s Max is shot and McAdam’s Annie has to remove the bullet is surprisingly nasty yet hilarious at the same time. Squeaky toy, anyone? Sharon Horgan, the Irish comic actress from TV’s Catastrophe, is a delight, playing brilliantly off Billy Magnussen’s dim-witted Ryan, while Jesse Plemons almost steals the film as Gary, the creepiest cop you will ever see.

Game Night may not be the most original film you will see this year and it certainly won’t stay in the memory too long either but it’s so refreshing to go into a comedy and hear an audience actually laughing out loud and enjoying what could have been a foul and vile piece of trash. Instead, it is thoroughly entertaining and would make for a nice double bill with Date Night. trust me, this is a huge compliment.