The nomination for the longest and most complicated title has to go to this typically British drama set just after the war and based on the best selling novel of the same title. As impressive (or contrived) as the title is, this is the kind of film that, someone much wiser than me, has said, would be perfect with a nice cup of tea. I am guessing that the matinee performances will be sold out, and there is a safe feeling about this that somehow is the film’s downfall.

Just after World War II, an author, Juliet Ashton, receives a letter from Guernsey telling the story of a literary club that had been set up to help the residents escape from the occupation of their island. Fascinated by the story, Juliet decides to visit the group, much to their surprise and slowly builds up friendships with the small community. While there, she starts to investigate the mystery of its founder member, Elizabeth, who disappeared under suspicious circumstances. Juliet tries to uncover the truth while forming a connection with a pig farmer, Dawsey, even though she is engaged to a wealthy American.

Directed by Mike Newell, who has directed a few whimsical British dramas in his past, this is a pleasant enough film that tells you exactly what to expect from the poster; it’s never going to offend, it has a solid ensemble cast and it’s going to be easy on the eye. All of these things are present and correct. Yet while you are watching it and it’s gently washing over you, you wish it could be braver or even throw in a curveball to shock or surprise.

It looks like it’s going to when Juliet arrives on the island and starts to learn about the society’s creator, Elizabeth. Everyone seems to be secretive about her. She has a little girl, left in the charge of Dawsey and she touched the whole group. Juliet starts digging to try and find out what happened to her and when this becomes the centre of the story, the film looks like its heading in a much darker road. However, it doesn’t stray from that path too far. This is, after all, comfortable cinema.

The scenery is, as you’d expect, beautiful. Shot mostly in Cornwall and Devon ( filming seemed to be impossible on Guernsey) it has a picture postcard quality that suits the style and feel of the film. Newell’s use of the camera never shifts to that of pointing it at his cast and letting them tell the tale. If you don’t like unusual camera angles or gimmicky effects, then fear not. You’re safe here.

The cast, made up of those actors you can rely on, is a delight. Leading the pack is Lily James, whose star is getting brighter by the minute. As Juliet, she brings a mix of a curious author and coy nervousness that makes her appealing to everyone she meets. There is something easy about watching her. She has the English rose quality while she doesn’t just sit back and develops her character nicely, watching this nervous young woman grow. The society is made up of reliable performers: Tom Courtney is the kindly elderly gentleman who runs the Post Office and is the creator of the potato peel pie. Katherine Parkinson and Penelope Wilton bring colour to their roles of the eccentric young woman who makes gin and the elderly woman affected most by Elizabeth’s disappearance. 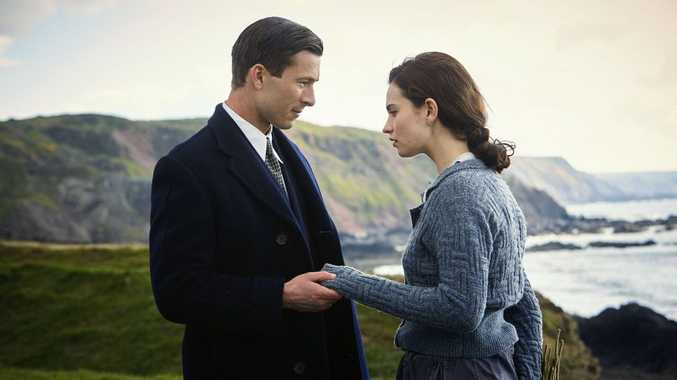 This charming film is more about the feel-good factor than the darker side of drama. It has a love story that won’t surprise or a finale that you’ll be able to predict from the start. It’s pleasant enough for an afternoon and while it may be a tad too long, it will make you smile throughout and you really don’t mind spending the time with this cast. Very safe cinema, indeed.