After the dark yet spectacular Avengers: Infinity War, where could Marvel possibly go? They could try and better the epic from earlier this year or they could turn to something a little more disposable as a follow-up. Enter Ant-Man and the Wasp, the sequel to the 2015 hit and answers the questions, “Where were they during the Infinity War?” 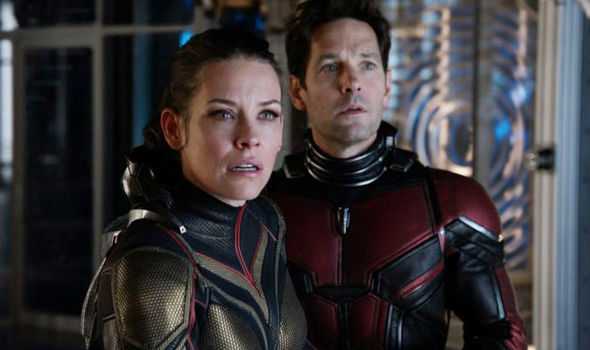 Scott Lang, aka Ant-Man, is under house arrest after the events during Captain America: Civil War. Dr Hank Pym, the creator of the Ant-Man suit and his daughter, Hope, as also on the run from the FBI because of those events but they have other things on their mind: bringing back Hank’s wife, Janet, from the Quantum Zone, which she disappeared into 30 years previously. Meanwhile, a character called The Ghost wants Pym’s technology in order to stop the strange effects an accident has on her.

The first Ant-Man had major production problems, with original director Edgar Wright leaving due to creative differences to be replaced by Peyton Reed. This time, no such problems, with Reed in charge from the start and so the film doesn’t seem as disjointed as the original did. Having said that, where this new film suffers is from massive overplotting. There are so many strands to the story going on that it sometimes leaves you spinning.

It also relies very heavily on techno-babble. Everything is quantum this and quantum that. At one point, Scott exclaims, “Do you put quantum into every sentence?” While the plots twist and turn throughout the film and everyone on quantum duty, it does affect some of the newer characters, especially The Ghost, an interesting adversary for the superheroes. Her ability to walk through walls and then becoming a solid matter makes for some terrific fight sequences and yet there isn’t enough room to sympathise with her plight as to why she wants Pym’s machinery to control her.

If you manage to ignore the plots and subplots and the mentioning of quantum every other minute, the film is loads of fun. The effects teams work their magic with shrinking and growing of people, buildings and household objects. A fight in a kitchen sees the Wasp ducking mallets crashing down on vegetables while she makes salt pots grow as a weapon. Playing around with Ant-Man and the Wasp as they fight from tiny to large to, in Ant-Man’s case, enormous, is not only inventive but often hilarious.

The cast seems to be having a blast. Paul Rudd, the unlikeliest of all the casting in a superhero movie, has, excuse the pun, grown into the part of the hapless Scott. His comic abilities are used to great effect, particularly in a scene where he seems to have another person in him. Evangeline Lilly, as Hope/Wasp, really gets to develop her character as well as throwing some impressive shapes during the fight scenes. Michael Douglas gets to do a bit more this time and Hannah John-Kamen, as The Ghost, does well. The film is stolen, once again, by Michael Pena as Luis, Scott’s friend. Every time he appears on the screen, the laugh factor goes up. Who needs superheroes when you have Pena and his stories.

Ant-Man and the Wasp isn’t as sharp as the first film but as a slice of popcorn fodder, it does the job and after the rough ride of the previous Marvel movie, a little piece of light relief is certainly needed. Although if you stay for the post-credit sequences, the link with the events of Infinity War is there. Is Ant-Man and the Wasp the best superhero movie of the year? No, but it’s certainly one of the best comedy films this year.