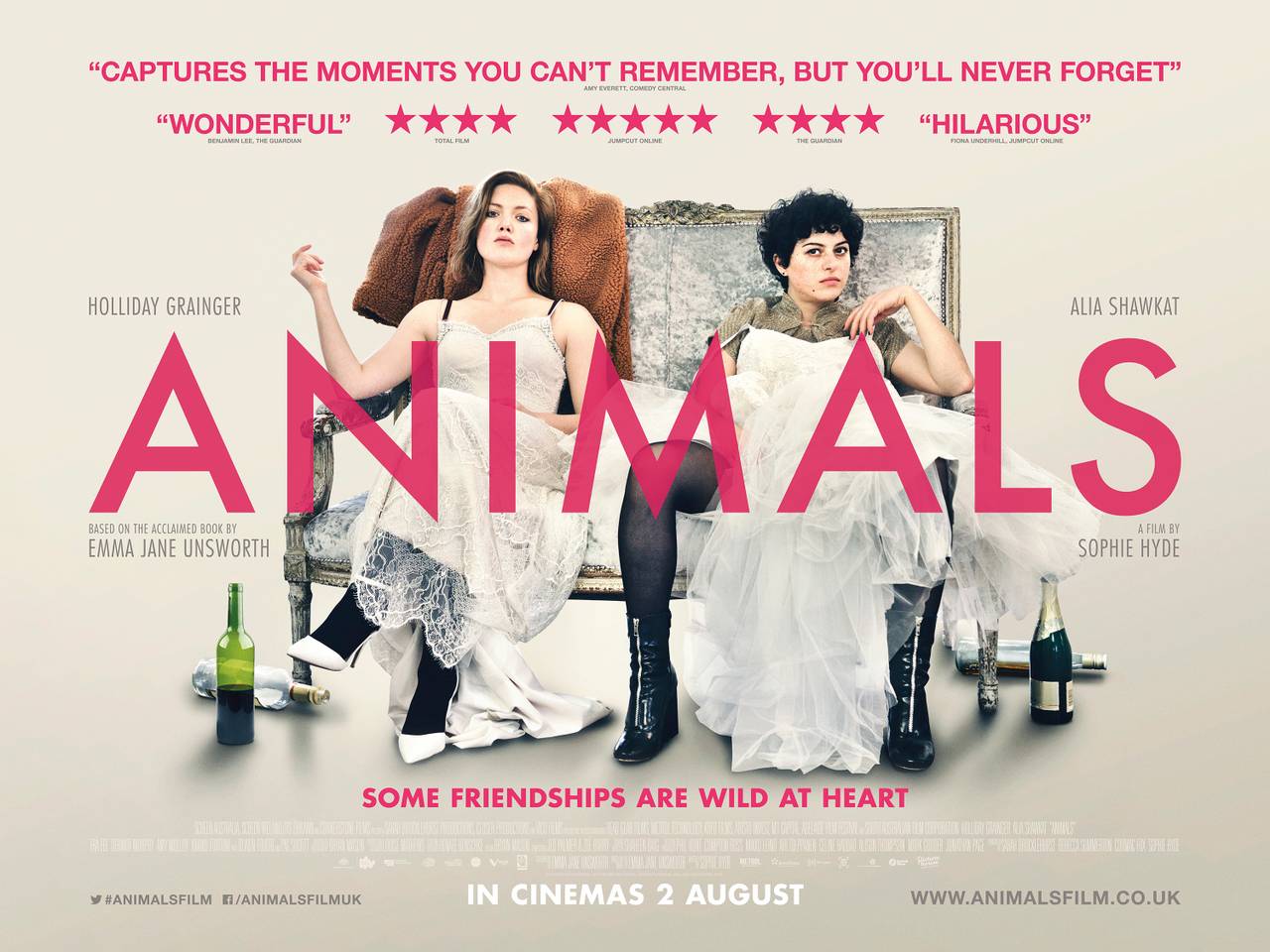 Written by: (based on the book) Emma Jane Unsworth

Animals is a new British film about being thirty-something and refusing to let go of their lives. It’s a film that, when I came out, I didn’t know what to make of. Someone described it as a Marmite movie, and I tend to agree. I went in thinking it was one thing and found it was something else. There is plenty to admire, but equally, there’s plenty to annoy too.

Laura and Tyler are best friends, living a life of pure hedonism, spending their nights on drink and drugs and, occasionally, having one night stands. Laura is a writer who hasn’t written much (ten pages in 10 years) while Tyler is a barista who just wants to stay young and fancy-free as her thirtieth approaches. Laura understands that the fun has to stop and when she meets and falls for pianist Jim, she has to decide whether to grow up and settle down, or keep living the high life.

Sophie Hyde’s second feature as a director is an impressive looking piece of work. With help from cinematographer Bryan Mason, Hyde captures the streets of Dublin as lonely, almost mystical places to frequent, while she puts together, with writer Emma Jane Unsworth’s script, a friendship that is both delightful to watch, while often infuriating, as these two women shouldn’t work.

Tyler is loud, opinionated, irresponsible and isn’t afraid to put her friendship with Laura in jeopardy in the cause of a good time. Laura, on the other hand, is much more in control, and although she loves the nights of binge-drinking and drug-taking, and with her sister pregnant, she knows this life cannot be lived forever. Do you walk away from your best friend? Or do you turn your back on her so you can settle down?

Described as a female Withnail and I, the film has moments of pure comedy gold, one involving Laura, a glass of wine and her sister’s baby, while the dialogue is sharp, often witty and very observant. Where it suffers is that you watch these two women and you feel somehow distant from them. You sometimes don’t care enough of their plight, and they occasionally come across as spoilt children. Tyler, more so, as she is willing to destroy her friendship to get a reaction. Reading Laura’s private notes in public would have me leaving and never returning.

There’s also a problem with the ending. It feels like Hyde doesn’t know when to stop. You think it’s going to end, and it carries on. This happens several times, making the actual ending more of an anticlimax. There are also far too many shots of foxes wandering the deserted streets as if to justify the title.

What it does have on its side are two outstanding performances. Alia Shawkat as Tyler is a wild child at heart brimming with energy and child-like wonder. She watches Laura’s plight with a look of a little girl plotting to spoil the party. Yet this is Holliday Grainger’s film. Often a supporting artist, she is given the limelight, and she takes it with aplomb. As the confused and troubled Laura, she underplays everything, keeping the emotions closed inside. It is a star-making performance. Even several hours after watching it, I am still battling my thoughts of like or dislike. I am leaning towards liking, and I do understand where both sides of the argument come from. I am not a 30-something female and so cannot relate to the characters in that way. Yet I can detach myself enough to see how others can have a more emotional attachment to this. Maybe it needs a second viewing. Until then I think I’ll sit on the fence with this one.