Ten minutes into Last Christmas, I worked out the ‘twist’. I palm planted my face in the realisation that this was where it was heading. That slap was the most enjoyable thing about this dire seasonal rom-com. It doesn’t give me any pleasure in saying that, considering the talent involved, but this is not good at all.

Kate is a young woman whose life is a mess. She works as an elf in a Christmas shop. She struggles to find somewhere to sleep, and she had a severe illness that stops her from returning home to her overbearing mother. Then she meets Tom, a mysterious man who starts to show her the good in life.

Co-written by national treasure Emma Thompson (who also stars in the film but more about that later) this has the perky, picture card approach that Love, Actually had to the season of goodwill to all men. Shot in and around London, it looks magical and unique. Except that I have never seen London looking so empty, particularly Covent Garden, where most of the action is set. Director Paul Feig uses the locations as another character, as we are shown the hidden areas of the city.

Yet this becomes more of a distraction. As you look and recognise the various locations, you can also find the faults. How is it even possible to get from Alexander Palace, on ice skates, running, and arrive in The Strand? This is worse than telling Thor he has two stops on the Underground to get from Charing Cross to Greenwich! The cast of extras and supporting characters are all stereotypes. A group of homeless people, who are very important to the plot, look inoffensive, and are willing to be involved in a sickening Christmas show without one of them telling everyone to F off!

Then there’s the script. Thompson, who we know can write well (see Sense and Sensibility for example) seems to have decided that cliches and witless lines are perfectly acceptable for a comedy. Every joke falls flat, no matter how much energy is being pumped into them by the cast. Some scream out pure desperation and often than not, you can hear Emma Thompson saying the lines when spoken by others. The inclusion of one mention about Brexit and one odd scene on a bus tries to give it a social comment of the times, but these are brushed aside as quickly as they appear.

The story, of a hapless girl who is a walking disaster, who dreams of being a singer in the West End but works in a Christmas shop, run by a woman who calls herself Santa, steals from everywhere. It’s A Wonderful Life spring mainly to mind. Except James Stewart didn’t have to dress as an Elf, another film it borrows from.

This film is being sold on the fact George Michael’s music inspires it. Perfectly fine, as Michael’s songs were often beautiful and very personal. While it leads to another problem, no one seems to know what to do with them. The title is Wham’s big Christmas hit but how can you squeeze in Praying For Time, or Heal The Pain? The makers don’t even try. They put them on as background music and fade them out before the chorus kicks in. They could have used anyone’s music for that matter. The worst part is the discovery of a new George Michael song being used over the closing titles. This jolly Christmas romp is played out with a song about addiction!

The cast does their most valiant. Emilia Clarke is perky and energetic as Kate, and she manages to hold the whole thing together, even if there are moments you want her to calm down. Henry Golding, fresh from Crazy Rich Asians, is perfectly fine as Tom but there doesn’t seem to be any real chemistry between the two leads. This could be on purpose but somehow I think that’s too clever for this. Michelle Yeoh is fun as Santa, the owner of the Christmas shop but Emma Thompson as Kate’s mother, a Yugoslav woman, is, quite frankly, embarrassing and you feel a little piece of you die from watching this usually perfect actress. 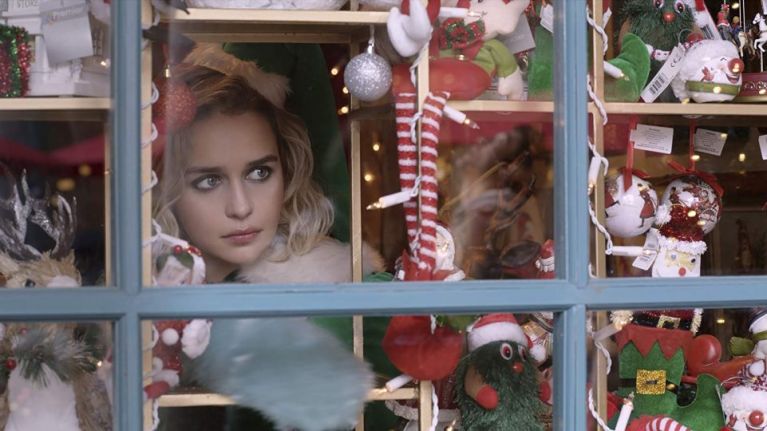 Last Christmas is, without a doubt, a massive disappointment and a film that, like The Greatest Showman, will win the hearts of those looking for some mindless escapism this season. Frankly, you need to get under the surface and see that this is a dire Love, Actually rip-off and you need to remind yourself just how good Richard Curtis’s film is. Terrible.