Last year, when the first Sonic The Hedgehog trailer arrived, there was a public outcry that the super-fast blue character from the massively popular Saga game, looked nothing like the Sonic everyone knew and loved. Cue a huge make-over to appease the fans. Now, the all-new Sonic, looking as much like the original creation, has hit the big screen. Will it be this year’s Pokemon Detective Pikachu? Or the new Super Mario Bros? Well…it’s kind of neither. It’s not terrible, but it’s not great either. 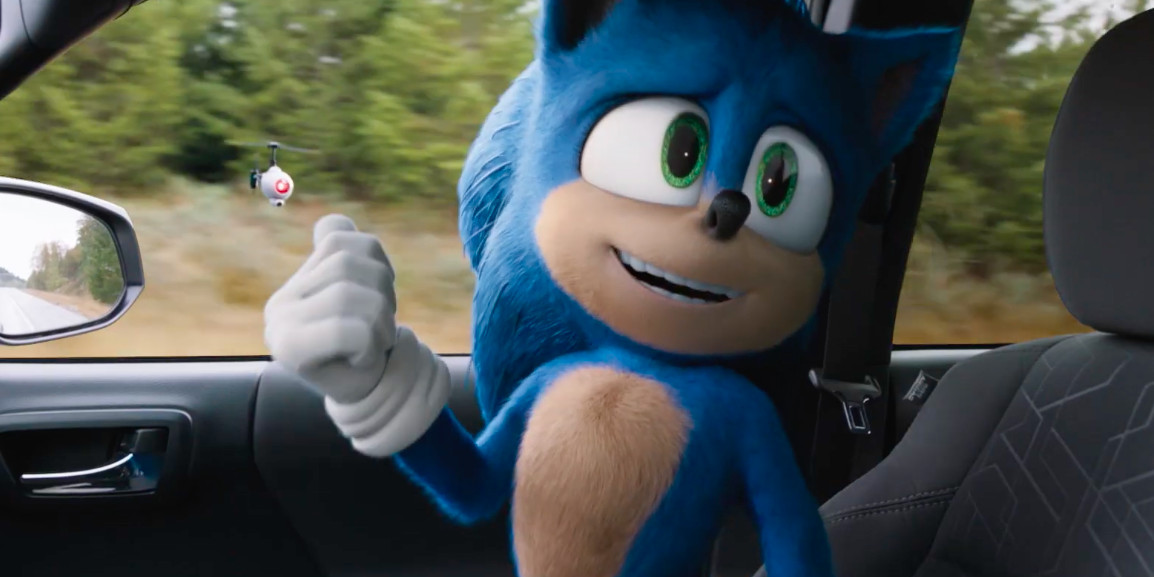 Living on Earth after escaping from his home planet, a blue, fast-moving hedgehog called Sonic has been in hiding in a small American town. After accidentally causing a total blackout, Sonic becomes the target for Dr Robotnik, a machine-loving narcissus. Turning for help from the local sheriff, Tom Wachowski, the pair have to head to San Francisco to find a bag of rings that Sonic needs to leave the planet, with Robotnik breathing down their necks.

Those familiar with the game know that Sonic speeds along a series of paths, collecting rings while avoiding obstacles along the way. This is mentioned in a very brief sequence, but this plays out more like a road movie. Sonic is full of smart remarks, and Sheriff Tom plays the straight guy. The pair, on their journey across America, start to form a bond and with Robotnik obviously wanting Sonic for all the wrong reasons, Tom becomes almost a father figure.

Director Jeff Fowler tries desperately to avoid the schmaltz and concentrate on keeping things moving with plenty of slapstick for the younger audiences. Yet there are times when Sonic does come across as annoying, and you feel you’re having a break from his consistent yakking when the film shifts to focus on Robotnik. What also doesn’t help is the plot is so paper thin, coming at you like a low rent ET.

As the voice of Sonic, Ben Schwartz does a decent job and sounds like you’d imagine Sonic’s voice to be. The script, however, has him saying often terrible one-liners that fail to hit the mark. As his straight guy, James Marsden is perfectly amiable as the likeable cop and he brunt of most of Sonic’s jokes. It would be nice to see Marsden given a part like the one in Enchanted, but he plays the likeable everyman well.

The winner of this film is the return to form of Jim Carrey. As Robotnik, Carrey has been released from his lease, and we get the type of performance we used to get when he first started. With his typical unique way of delivering a line and his ability for physical comedy, Carrey lights up the screen every time he appears. It’s massively over-the-top, but this is what this film really needs.

Coming out from the screening, I felt I had a good time, thanks to Carrey but without him, Sonic The Hedgehog might have struggled. The CGI is far better than initially planned, but if there is going to be a sequel, which I would expect, the script needs to be a whole lot better.