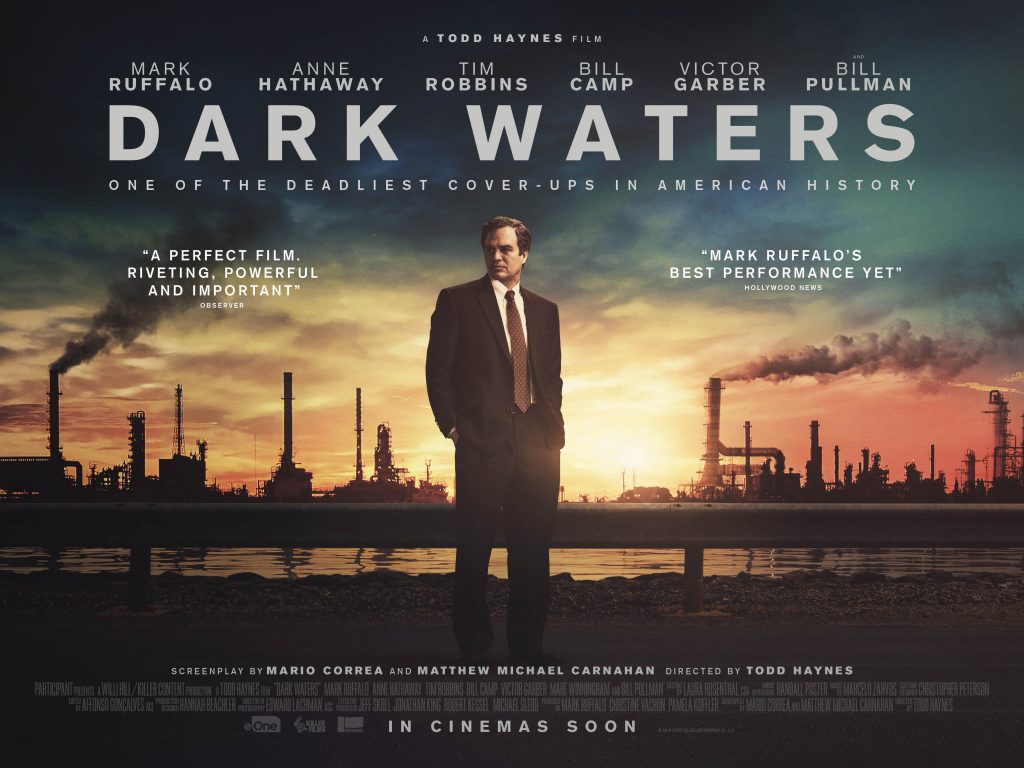 The awards season has come and gone, and so now we get the also-rans. Those films that seem to be explicitly made for awards and yet don’t manage to excite the voters. Todd Haynes’ latest, Dark Waters, is a perfect example. An issues movie based on a true story which is brimming with “Oscar” moments. If this had been released alongside the other contenders, it would have been lost. However, now we have passed half term, and on the brink of the Summer, this doesn’t feel like Oscar fodder and relief from brightly coloured computer game adaptations.

Rob Bilott is a corporate lawyer who has just become a partner in a huge law firm, when a local from his grandmother’s hometown barges into his office, demanding a lawyer. It seems that Wilbur Tennant’s farm has been infected, killing off his cattle. At first, Bilott is reluctant to take the case, but it soon becomes apparent that the land has been polluted by a top chemical company, refusing to take responsibility. This is a David vs Goliath tale fo the little man versus corporate America.

This is an unusual story for director Haynes to take on. His previous films include the Douglas Sirk-style melodramas Far From Heaven and Carol or music films like Velvet Goldmine, and I’m Not There. So tackling a straight-forward conspiracy drama is a huge departure. Sadly, it lacks the director’s flair and style, with the film coming across workmanlike and relatively ordinary. Having said that, the story is fascinating and throws up several questions about big business. Rob Bilott starts out as a man refusing to take on the case as it’s not his field. He’s there to protect the corporation, not sue them. Once he has visited the farm, however, he feels there is something seriously wrong and possibly a vast cover-up. We follow Bilott’s journey through the paper trail, which swamps his office, to being lied to by men he would have customarily defended. This is a tale of greed and irresponsible actions by a company big enough and famous enough to know better. While he is one man, fighting for the little guy, he could destroy everything he has worked for. Haynes keeps the story moving as much as possible, although there are odd scenes that could have been removed to quicken the pace.

The performances from an expert cast are universally terrific. Mark Ruffalo, stepping away from his Hulk persona, does a better job than his Avenger alumni, Robert Downey Jr, with his first film after Endgame. As Bilott, Ruffalo is perfectly cast. His quiet, unassuming personality makes the lawyer much more human. A caring, passionate man who is willing to sacrifice everything for something to believe in. Anne Hathaway, as his wife, is given a role that most actresses would struggle with, as she doesn’t have a great deal to do. Her part is the most telling when it comes to a possible awards film, with a long and persuasive speech that would have been that Oscar clip for Best Supporting Actress. Dark Waters is a disturbing, shocking tale of corporate America, forgetting about humans for profit. It does grip and keeps the attention throughout. Ruffalo is a charismatic lead who works hard. However, compared to other films that were after awards this year, you can understand why it was ignored. Powerful but not stunning.